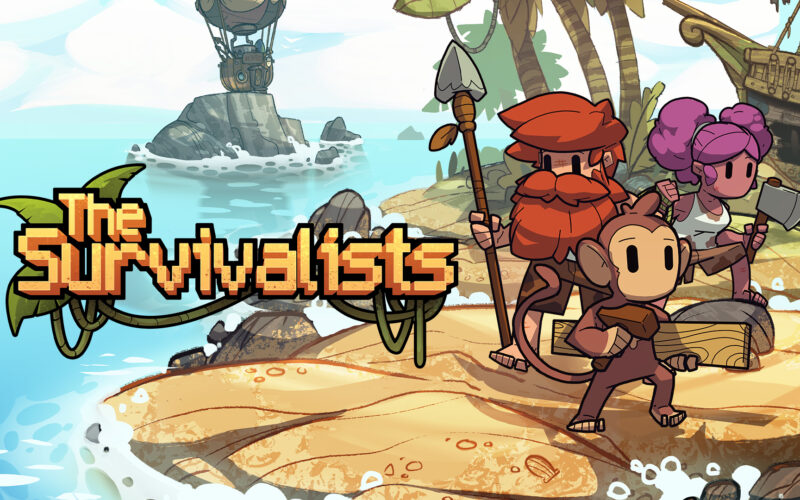 The Survivalists PC Review – The Ruler of Monkeys

Have you ever played a game and thought, “This game would be better if I had an army of monkeys I could train to do all of this instead!”? No?! Well, me neither… But boy do I now! Join us on our journey as we embark on ‘The Survivalists PC Review‘

The survivalists is a survival game (Believe it or not), created by The Escapists developers Team 17, where You are stuck on an island with no memory as to how you got there. You must overcome food shortages, Dungeon exploration, Fierce enemies and more in order to survive on your little piece of ferocious paradise. With nothing more than the clothes on your back, the tools in your hands and the handful of monkey servants that will do whatever you ask, you must venture the huge Procedurally generated map in search of a way off of your little rock.

‘But where do the monkeys come into the equation?’ I hear you ask! And great question I must say, you are a smart one no doubt. I asked a similar question myself I’ll have you know – And to answer your question, I have no idea how, or why becoming some sort of monkey dictator was hot in the minds of Team 17, But I grew to embrace and love this great addition to the game.

The gameplay of Escape From Monkey Isl*Cough* I mean… The Survivalists adds a unique flavour to the survival genre. With the focus not being on changing the island into a home. But instead to progress through and find a way off of the rock that you are stuck on.

Though the game is well made, there are most certainly some aspects of the game that need to be worked on over the coming weeks following its release, for sanities sake. Reasons I will get into later in the review.

The tutorial is delivered within the first 5-10 minutes of the game, and that is all that is needed. Sometimes you get little pointers as and when you experience something new. But the bulk of it happens in your starting moments on the island.

If you are one of these Chad’s of gaming, you can just skip the tutorial entirely. And start life on the island completely clueless. You do you, the option is there!

The character designer is pretty simple and is adjustable throughout your playthrough. it isn’t the most adjustable character creator, but it does enough to separate you from the guy who’s lobby you have just invited yourself into.

The combat on The Survivalists is incredibly frustrating, at times you will line up to hit the enemy, only for it to turn out you are a millimetre too far back, too far to the left or too far to the right. Not the greatest mechanic in-game. But luckily for me, I ended up just getting an army of monkeys to do the killing for me – Problem solved.

Have I said this game has Monkey’s that worship your every move? Not sure if I did. This is a huge focus on the games mechanic. And for the most part, it was great.

Having one monkey go around cutting trees down, another building at camp, another crafting, and then a small army following you around slaying enemies.

The AI is fairly decent, and my happiest moment in-game was when I purchased a gold sword from the islands mysterious shop, before handing it to my chief monkey, Wilson. The pleasure in my eyes watching my pet monkey going around one-shotting enemies was a luxury to behold.

BUT, it isn’t all confetti, fireworks and smiles. There are some really, and I mean REALLY irritating mechanics, especially with your little combat monkey chums. Many commands in the game share the same key bind by default – The space bar. And this cannot be changed either.

The problem is that for your monkeys to go into combat, they need a weapon equipped. And to do this you have to first hand them your weapon, with the SPACE bar. The same button that you use to interact with pretty much everything in the game.

that isn’t where the problem lies, the problem lies when you try and interact with something and accidentally swap your stack of Long Grass that you are holding with your monkey’s weapon. Now in the middle of combat, you are left chasing your monkey friend around trying to give his sword back to him. This happens ALL OF THE DAMN TIME!

I assume this is something that will be changed by the game developers, but at the date of reviewing it is still an issue.

The crafting on the game is fairly unique, There is no leaving you to discover what is needed to make what like there was on The Escapists. Instead, it is very upfront about what you need for each craft.

In order to progress onto the next craftable item. All you have to do is first craft the linking item that is adjacent to it. This just means to progress to the later items, you must first create all the items prior to it. kind of like a technological advancement system of sorts.

Looting is a bit irritating, to loot you have to either left-click, right-click or mash SPACE (Don’t start me on a second monkey item swapping rant again). I chose to do the space bar as it’s just so much easier. (Or So you’d think…)

vaults are little dungeons in the game, where you have to kill your way through, in order to find some nice plunder and gold. They usually contain a large number of enemies and/or tough mobs that results in some aggressive monkey on man warfare. Just with fewer faeces flinging and more scratching.

Treasure maps can be obtained from the mysterious shop on the island, Pretty much speaks for itself really. But it’s a welcome addition to the exploration side of the game.

Ooooh, Mysterious Chest, Spooky right?! Well, no actually. But they are a cool feature. You fill them up with all the goodies you find on one island. And they can be transferred through the ether and into any other online or single-player island you create.

The multiplayer on The Escapists is incredibly fun, delegating different tasks between up to 3 other players in order to meet the common endgame of making your way off of the island is really immersive and full of laughs.

Unfortunately at the moment, there is no crossplay, something that Team 17 have dropped the ball on. such a feature would benefit a title like this greatly.

The graphics of the Survivalists haven’t veered away from the design that is used in The Escapists. It is based in the Escapists Universe so it makes sense why. And that isn’t a bad thing. I have no issue with the simplistic design.

Unfortunately, this game doesn’t hold as much in terms of construction capabilities as it’s rivals of the genre. With the game not having a rotate option on your constructs. You just have to place all of your furniture facing the back wall. And work around the limitations that the lack of a rotation function brings.

This lack of rotation function means this game would be a miss for the time being if you are looking for a ‘Minecraft Building’ sandbox experience. This game doesn’t really offer that. Yes you can make nice looking buildings whilst you are here, But your hands are pretty tied if you wanted to really let your imagination loose.

The map to The Survivalists is deceptively Large, starting you on a fairly small island, before leaving you to discover a vast quantity of procedurally generated islands, some you can wade through the water to reach (But be aware of the sharks!) And others you have to build a raft in order to get over there. Each island has it’s own unique layout, and they are all beautiful to explore.

Being a survival game there isn’t really much of a story to The Survivalists, Instead, you create your own story. Occasionally finding little books and other little easter eggs with a little description as to the lore behind this mysterious island. There isn’t really much more to it than that though.

as you venture out, unravelling the islands mysteries step by step. You are complimented to audio that is influenced by your surroundings. near water, hear the subtle waves. Near a forest, hear the increased noises of wildlife. Near a monkey, Hear the primate grunting. All this really sets the scene as you can hear it all before you see it.

All this ambient noise is complemented by the beautiful, yet repetitive, calm synthwave music that plays in the background.

The Survivalists PC Review: The Verdict

The Survivalists offers a great twist on the survival genre, the inclusion of monkey servants means that even when playing alone, you are not alone. And the smooth monkey AI makes this a joy to play through. Anything you can do, the monkeys can be trained to do. And it works! Apart from the swapping thing… But I’m not going there again. Would 100% recommend for fans of the genre!

Why not also read –

A fantastic exploration survival experience, either shared with your real friends or your primate friends, in fact, why not both. Would definitely recommend for all fans of the genre.

Luke PillarOctober 8, 2020A fantastic exploration survival experience, either shared with your real friends or your primate friends, in fact, why not both. Would definitely recommend for all fans of the genre.7.4110
Your RatingUser Rating: 0 ( 0 Votes )
Previous PostRide 4 PS4 Pro Review - Is it a fun game or not? Next Post art of rally Review - Exciting 2020 Drift Game