SpongeBob SquarePants Battle for Bikini Bottom Rehydrated PS4 Review: Sometimes its good to rewind time and jump in to an old game that has been around before. I often boot up classic games and sit and chill out on my old consoles. There was always a reason that I kept all of my PlayStations. Not just because I’m a collector and refuse to get rid of them, but also because I like to go back to the hundreds of games I have amassed for them over the years.

The thing is that people keep screaming out for remasters of old games for the current gen of consoles and more often than not, thats a bad thing when companies do it. Then you have the likes of Capcom who insist on a total remake of Resident Evil games and basically ruin them from what the originals were like. I don’t think that games need to be remastered on the whole. The general trend is that the originals play better.

When SpongeBob Battle for Bikini Bottom first came out on the PS2, it did feel lacking for that console and more of a PS1 game. That being said, it is a pretty faithful remake. In this day and age of games sometimes being frustratingly annoying it is nice to be able to find a game that you can just load up, chill out with for a few hours and turn off when you start getting bored.

Thats not a bad thing either.

SpongeBob does this well; allow you to loose a couple of hours running round, collecting things and jumping around like an idiot without any real stress involved. Its a fun escape from what most developers now think gamers want (a hard slog). These are the type of games that made console gaming fun from the start and a few hours of fun at a time is just right before some form of boredom can start to set in. For me, its not a game I can grind from start to finish and spend dozens of hours on like I have with numerous titles like Days Gone or Death Stranding, but I like that about it.

The game takes part in a three-section hub of Bikini Bottom and breaking out into stages such as Jellyfish Fields, Rock Bottom and The Flying Dutchman’s Graveyard the game does offer a lot of areas to cover and collectibles to find. The format which we all came to love with the likes of the original Spyro games and Banjo-Kazooie of collecting minor collectibles as well as more important ones scattered literally everywhere throughout the world is in full swing here.

The great thing we enjoyed for our SpongeBob SquarePants Battle for Bikini Bottom Rehydrated PS4 Review is that as you play through the game you pay no mind to collecting the ever present main items, but it is only when you start to put some time and effort into hunting out the 100 golden spatulas for instance, the level design and scale of the game starts to sink in and be appreciated much more than you would at first.

Plankton has Plankton has devised yet another plan to steal the Krabby Patty formula and this time he plans to take over the entire town of Bikini Bottom. Of course he has screwed up his master plan and created a robot army leaving no one safe, not even himself. It is up to SpongeBob and the gang to put a stop to the robots and save Bikini Bottom.

Each world you enter features Patrick or Sandy as a second playable character which allows them to use their special abilities to reach new destinations that you couldn’t with SpongeBob, it also switches up the gameplay to stop things from becoming a little too boring. Patrick can pick up items allowing him to throw them to hit distant switches or kill enemies that are wandering around. Sandy, equipped with a lasso can navigate across large gaps that otherwise would be inaccessible.

Unfortunately you cant just swap between these characters at will, there are certain points in the game where you will need to find a ‘Bus Stop’ to change between them, obviously purposely placed.

The general premise of the game is as a collect-a-thon and is fun to take on. The levels are largely quite open in terms of scale and size which certainly makes finding the last few items that you need fun to find, being hidden in places you wouldn’t think to look, secret hiding places and special triggers than can only be used after completing certain tasks.

The problem is that there is a lack of in game hints to what to do like you get in more modern games that like to hold your hand throughout. In this respect, games have definitely become much more user friendly and have forgotten about us old school gamers who were more than happy to switch on our Megadrive’s or SNES’s and complete a game in one playthrough without dying.

After all, there was no such thing back then as a simple save game or auto saving and you had to be able to learn and perfect the game over hundreds of plays.

This isn’t a bad thing. I prefer it this way and isn’t in any way a criticism of the game. I guess there will be a lot of gamers out there that will mark this as a bad point for the game, but those of a certain age certainly wont have the experience that a lot of us did before save game became standard. Sure, the developers could have easily added more hints, but that wouldn’t have stayed true to the original game or kept the challenge of the game alive. Yes, theres hints in there of what new characters do etc, but thats about it.

Beyond the story mode, there really isn’t much on offer. Adding an online multiplayer really wasn’t needed, but they did it anyway. The problem with that is the ‘Horde Mode’ is easy to not bother with at all. It feels like an after thought of adding it in there and is quite bland at best.

To sum it up in basic forms it is 26 fights with different enemy combinations obviously increasing in challenge and difficulty the further you all progress. You all chase a Robot Squidward across the islands that was left out of the original game.

The problem for my SpongeBob SquarePants Battle for Bikini Bottom Rehydrated PS4 Review is that it is missing anything of value for playing it. All the enemies have been lifted from the game, the boss as I said was missing from the original game and added here, but just doesn’t feel fun to play like the main game.

Combat doesn’t even feel like its the focus here either as with the game as a whole, thats just a distraction, after all, enemies aren’t challenging within the game so why would they be in an online multiplayer mode? If you never try this game mode you wont be missing anything. If you are curious then give it a try but don’t say I didn’t warn you.

Now personally I have never been a fan of the SpongeBob cartoons, that humour (if you can call it that) just feels stupid to me, but there are a lot of fans out there. Obviously that is transferred into the game and to be honest I didn’t mind it.

The game as a whole looks and feels childish, the challenge is far from it. The imported humour does work in it but didn’t add anything for me. I’m not a miserable old git, after all I grew up laughing away to Beavis and Butthead and Rocko’s Modern Life but it does feel forced at the best of times and certainly didn’t even bring even the slightest of smiles to my face.

Obviously the original graphics have been improved over the original PS2 version of the game for current gen. They do still look basic though and are far from a masterpiece in artistic work, but that still adds to the authenticity of the game and its overall feel.

Sounds are basic enough but characters sound genuine to the cartoons. The original game did have stand ins doing Voice Over which fans did notice. It does seem like the voices have had a total rework and the actual actors have provided their time for the game; if not them then there were some very good soundalikes involved.

Replayability in the game is there if you want to rush through and not fully explore. The game doesn’t require you to fully collect everything, but if you are a trophy hunter then you will be going back over the game with a fine toothcomb to find everything there is to be found if you don’t do it the first time round.

The game may look like a kids game in appearance for our SpongeBob SquarePants Battle for Bikini Bottom Rehydrated PS4 Review, but the lack of hand holding certainly means that children will probably struggle with it. I would say that is definitely aimed more toward the adult fans of the series. The game does present a challenge for children, especially young ones, but those of us at that certain age learned to game playing stuff like this and made us the gamers we are today. I say bring it on even more to allow the younger generation to once again feel challenged in games and not just give up straight away. 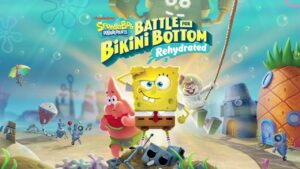