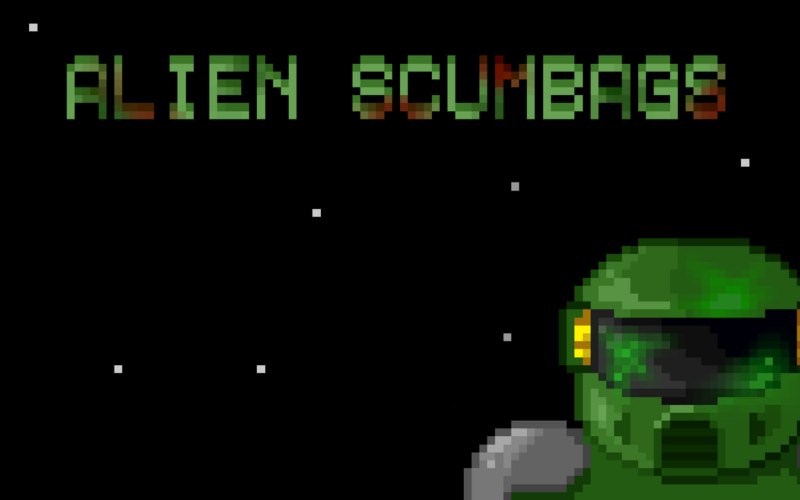 An incoming radio message, humanity on the verge of destruction, earth’s heroes on their way … oh they couldn’t make it, okay. Guess you’ll have to do it then.

As one of the earth’s z-list celebrities, you play as a familiar looking space marine/cook  aptly named Master Chef. Fighting through increasingly difficult levels in this 8-bit, space-themed horror game, you must find out the truth of what happened to the crew of the Nostrami. Fighting strange creatures, discovering audio logs and having a whole lot of fun on the way.

The story of this 8-bit style game is simple but tonnes of fun, you must make your way through the increasingly dark depths of the Nostrami to discover the truth – and a whole bunch of hilarious pop culture references and Easter eggs. This game is very lighthearted and a lot of fun but the story at points felt a little (pardon the pun) 2 dimensional, lacking the depth to really take this game to another level. However, this is a spoof game and its story is meant to be fun so it’s best not to take it too seriously.

The game recommends a controller and the controls were incredibly easy to use; the movement and actions are incredibly smooth, with no issues to mention, to be expected in a graphically non-demanding game like this. The gameplay is a whole lot of fun and there is so much scope in this game for replayability with random gumball style machines scattered across the levels which distribute random objects, enemies and characters each time to keep each run feeling fresh. Each of these characters has their own abilities and most are nods to similar games or films in the space genre.

Although simple, I really enjoyed playing this game the gun mechanics were easy but due to restricted ammo and reloads on your one and only reusable weapon you have to carefully cycle through your weapons to complete the level in the best way, fighting through zombies, aliens, face-buggers and giant spiders along the way.

My only real gameplay issue is that of replaying failed levels in the game. To replay a level you are charged a certain number of XP points to repeat it. However, when out of these points you are returned to the main menu, where you can simply click continue and start the level again – being taken completely out of the game to go back in each time was frustrating and definitely took away from a lot of the other fun aspects of the game.

As well as having multiple characters and lots of easter eggs to discover, this game is replayable because of its multiple difficulties. With the difficulty settings starting off at ‘Pussy’ where the game sets the lights on and provides easier enemies, ending with the pitch-black nightmare levels of ‘Hell Is Waiting For You’ (which is certainly not an exaggeration) you can play Alien Scumbags again and again challenging yourself a little more each time.

The biggest selling point of this game is its humour. The fourth wall shattering dry wit hits you from the start and with every little reference you feel that this was definitely a passion project for the developers who have a love for everything space and horror related.

The 8-bit style 2D graphics were awesome. Doing exactly what you’d expect for this genre and then some more. Creepy transforming zombies, blood spatter and the detailed yet challenging terrain all showcase the developer’s artistry.

The synth soundtrack was great too, varying in pitch and speed when faced with gruesome enemies or discovering secrets. However, when having to repeat levels it was, perhaps, in danger of becoming a little repetitive. The weapon and environmental sounds are definitely worth mentioning though, with each of the 4 weapons in the game recognisable by sound alone and the enemy noises being genuinely scary if you’re not expecting them in the dark.

The Company Of Wolves 1984 Film Review(Spoilers)

Pangeon PC Review – Is It Worth It?

Ancestors: The Humankind Odyssey – How I Am Definitely Not Qualified To Be A Human Being In 2021