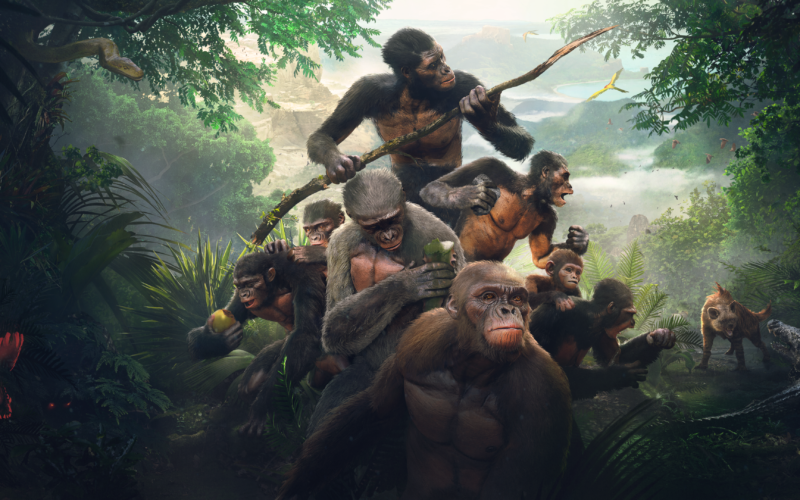 Ever find yourself wondering how you’ve somehow become a functional adult? Imagine this on a massive, god-like evolutionary scale and you’ll begin to picture my playthrough of Ancestors: The Humankind Odyssey . A survival game based upon the early story of human evolution, you are thrown into the deep end of the game with nothing but a friendly word from the developers to send you on your way: ‘Good Luck, we won’t help you much’. It soon becomes apparent that the team at Panache Games aren’t kidding.

Being a survival game there is no traditional story element to the game. The story, if you care to find one, is that of humankind’s evolution; an idea that is supposed to help you throughout the game. You start off as an ape living with their small family gathering, you must learn to communicate, move, walk and mate to help your colony of primates thrive and survive.

I started off as an ape called ‘Muk’ and learned extremely slowly how to forage, bond with others and even begin to craft and build; a feat which took around 3 hours of gameplay. This game certainly doesn’t hold your hand and death becomes an inevitability rather than an option. I lost my first Ape around 4 hours in, to a predator attack. The second only an hour later. The purpose of the game is to evolve; as you learn and explore in the game you develop and strengthen ‘neurons’ (learned skills and abilities) which can then be passed onto future generations – simple, right? These sometimes take hours if not days to achieve and if you die you lose them. This is, however, the ultimate point of the game; what is the ultimate survival game if not the endless battle between evolution and nature?

This game initially suggests using a controller; I tried both this and a KB+M and admittedly the controller makes the movement significantly easier. Saying this, the movement system wasn’t great with awkward controls that became unbearable at points when, in a game about tree inhabiting apes, I was unable to climb down onto lower branches in trees; seriously injuring my apes on an alarmingly regular basis. The movement in this game was partially redeemed by the freedom to jump in any direction you like, jumping from the trees within your reach as freely as in real life. However, when jumping there is a considerably noticeable frame drop.

The gameplay centres around using your ‘intelligence’ to understand and explore the landscape. You can listen, smell and explore your surroundings to develop skills and grow neurons to pass onto future generations. There is no inventory so to speak, you can only equip what you can hold, generally food, tools, or resources that can be crafted. The game however, gives you little to no explanation on how to acquire these items.

Technically, you should know all the steps, being an evolved hominid yourself, so you must think logically to figure out which tools do what and which items can be crafted. This however can be tedious, for example: I’m not sure whether to call this a spoiler here but [SPOILER WARNING] you can hit a branch from a tree with a rock to make a stick. It took several hours for me to get the hang of the game enough to pair these two together followed by several minutes actually crafting a ‘stick’. I then used this on one of the larger liftable rocks in the game for it to snap instantly. I painstakingly crafted another stick for it to break again … then again … and again – you can imagine one’s frustration.

Although this sounds tedious and at points it can be; the ultimate point of this game is survival, which doesn’t exactly have a reputation for being a thrill seekers dream. Yet in spite of this the gameplay was enjoyable, I admit you receive very little at first for the seemingly gruelling amount of effort you put in but ultimately it’s worth it.

The gameplay is hard, frustrating, and yet strangely compelling; I want to go back and see what I can craft or expand my group’s territory and build connections to evolve, even if I know it’s going to take me days. The gameplay has to be hard for the game’s premise to work and if you don’t mind an awful lot of grinding you should really enjoy this game.

The world created by Panache games is subtle yet interesting. You move through beautiful waterfalls, seemingly endless forests, smokey swamps and many more varied and interesting landscapes; each with its own unique crafting items, colour palettes and incredibly thought out terrain. The Apes themselves seem to use the same simple player models, but you will die so many times in this game that this was never an issue.

The game uses its visuals to correspond with certain gameplay mechanics, the biggest one being the element of ‘fear’. When scared; the screen will fill with terrifying graphics of black fog, glowing red eyes, and sharp teeth. Whilst initially cool this became frustrating, preventing you almost completely from seeing the terrain and your surroundings and felt more like a punishment for exploration than an immersive visual technique. The game also likes to throw in random, unexpected cut scenes as you explore these are horribly jarring and definitely ruin the immersion. There was also an issue with the occasional low-poly modelling on enemy characters in-game, which detracted from the otherwise consistent graphical fidelity. I did however overall think it was a genuinely lovely looking game, especially when compared to similar titles available in the survival genre, the poster-child genre for early access nightmares.

The soundtrack of this game was incredibly relaxing but maybe a little forgettable. However, kudos given to the developers understanding of just how much time was required to really get into this game, therefore ensuring the music is subtle, gentle, and doesn’t get repetitive no matter how long you play for. Sound design plays a vital role in aiding the gameplay mechanics and so perfecting the ambient noises and character sounds would have been, I imagine, incredibly important; it all seemed realistic and appropriate, if perhaps a little repetitive and if you’re out exploring and suddenly attacked by a predator they can even be startling and scary. All said, with its soundtrack and ambient noise, you could plug your headphones into and disappear for several hours.

Space Crew Review – Is It Worth Buying?