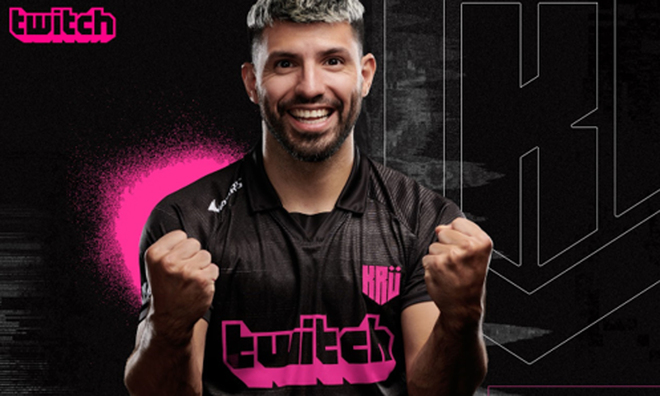 Famous footballer Sergio Agüero has today unveiled his new Esports team, KRÜ Esports. The four-time Premier League champion has been a popular figure on the twitch platform over recent months and has set his sights even higher. Sergio Aguero Announces new esports team will also be self-funded, with all earnings made from the platform to be reinvested into the team.

The world-class Argentinian striker, who plays for English side Manchester City, Has made a number of headlines in both the football and gaming community recently. During the lockdown, he phoned his good friend, Lionel Messi during a Livestream – You may have heard of him.

He has today taken his streaming career even further. Announcing that he has started up his own Esports team named KRÜ Esports. This is huge news for Gaming as a whole – But even bigger news for the South American E-Sports scene. Who’s current E-sports set up is a long way behind that of Europe, America and Asia.

He also announced that any money made from the E-sports team will be reinvested into the team in order to assist it in reaching its full potential.

At current, there is nobody signed onto the roster of KRÜ Esports. But in the announcement trailer a number of titles were showcased, including Rainbow Six: Siege, Fifa 21, Rocket League and Valorant.

The team has announced sponsors of the E-sports team include Twitch, Aorus, and AMD.

The team is speculated to operate in both Latin America AND Europe. Which is massive for E-sports across Southern and Central America.

Aguero has fast become one of the largest Spanish speaking twitch streamers in the world. Displaying hilarious antics, outbursts, stories and breakdowns of his own football performances on stream in front of audiences regularly exceeding 40,000.

He started on the Twitch platform predominantly playing FIFA. Though has since become a variety streamer, often playing other titles with other big Spanish speaking streamers such as his now good friend El Rubius.

We created KRÜ because I want you all to enjoy what we do. I earn my living through football but I also enjoy it and I love it. When one is happy working, it is seen and gives us the opportunity to make many people happy with what we do. I want everyone who joins KRÜ to love what they do, to feel comfortable. Boost them and help them fulfil their dreams.

I’m happy to be on the best platform, Twitch, It is the platform that facilitates gaming the most. Surprises are coming, many projects together and I am grateful for the treatment they have given me from day one. Great things are coming!

One thing is for certain, This is the first time that a sports professional has targetted the E-sports scene. Time will tell what the future holds for KRÜ Esports.

For the moment, it is speculated that their sights are going to be immediately on FIFA 21, With Plans to sign players for other games to follow later on down the line. But being early days like it is, this is only speculation.

Why not subscribe to our Facebook. Where we will keep you updated on any additions to the KRU Esports roster as and when they come in.

Why not Also Read –