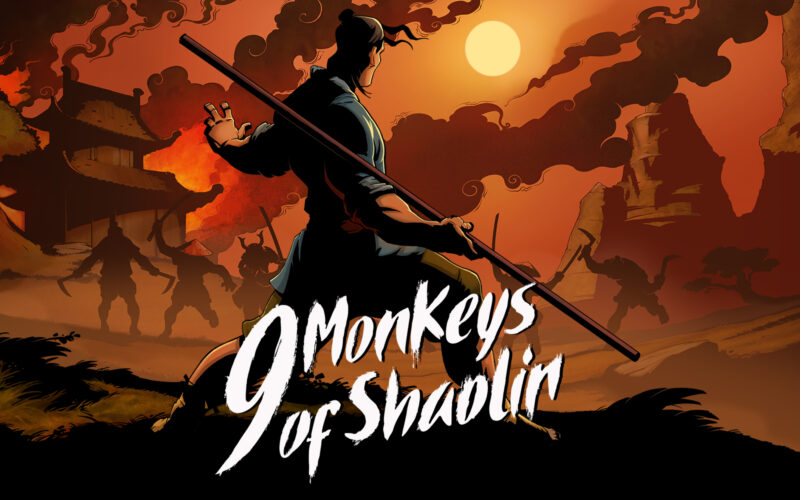 An incredibly elegant and well-written side-scrolling beat ’em up that at times falls victim to its own repetitive gameplay. Find out what we thought in our 9 Monkeys of Shaolin PC review!

9 Monkeys of Shaolin is a new 3d side-scrolling beat-em-up game that takes you on an adventure to ancient china, where you embark on a story of revenge and self-discovery – As you learn to channel your inner Qi… Kind of.

The game opens up with the attack of your village, you play as Wei Cheng, A fisherman who takes up arms in order to protect his village from the ruthless wokou pirates. Following his attempted defence of the village, he himself gets wounded in combat. Upon reawakening, he finds himself in the company of Shaolin monks, where he learns of the death of his grandfather during the attacks by his saviours.

It is here that Wei Cheng embarks on his journey of self-discovery.

The gameplay of 9 Monkeys of Shaolin doesn’t stray too far into unchartered waters. You start out on your journey with a small handful of moves available. as you progress through the story and begin to find yourself, your Shaolin master will gradually teach you more and more moves that will aid you in combat.

The game tries to discourage button mashing by incorporating a timed system, Forcing the player to parry or dodge incoming attackers and projectiles, before unleashing your own barrage of attacks.

Unfortunately, the majority of the game is spent fighting trash mobs, an endeavour that becomes rather tedious the longer you progress. Though this is something that all beat ’em ups fall victim to and is not exclusive to this title.

Where this game does recover is whenever a boss fight finally comes around. These focus on overcoming these foes through timings of attacks and finding each bosses vulnerabilities. The boss fights in this game steer away from a lot of the generic beat em up games and starts shifting towards the Dark Souls ‘Learning the enemy’ style of philosophy. For me, this was a great touch… Unfortunately, the bosses were few and far between.

The game also does add RPG elements, allowing you to change your weapons, Necklace and even your shoes to complement your desired play style. As well as progressing down a very extensive skill tree, allowing you to experience the game to the play style that you want.

The game has 4 difficulties, with each varying difficulty adjusting enemy damage percentages and disabling in-game save points. All this most certainly helps the player find their difficulty.

Unfortunately, I had to play through the game on my lonesome, but co-op is a feature that this game has. both local and online.

The graphics design and artwork capture the oriental beauty perfectly. The story unravels itself with a calligraphy style artwork design as if unravelling a piece of history as the story progresses and every single level has its own unique setting.

The fighting animations are pleasing to the eye and despite some minor bugs and hiccups. The game as a whole is aesthetically stunning.

9 Monkeys of Shaolin was very short. Despite being able to replay missions once you have completed the story until you have fully mastered every skill tree. I had fully completed every main and side mission in about 4 hours. Which for the price tag makes me question if this game is worth it on release.

The voice acting on 9 monkeys of Shaolin is masterfully done. You feel and empathise with the characters, and considering this is only a 4-hour game I can’t help but feel like the incredible voice acting played a huge part in this.

The soundtrack is quite repetitive, but eventually becomes part of the ambience of the game. The collective audio for 9 monkeys of Shaolin is certainly above average.

9 Monkeys of Shaolin is a well written and well played out game. The gameplay does become a bit dull come the end but for anyone who is a big fan of the genre then they probably don’t regard that in the same way that I do. Due to the length, I can’t see this game being worth the price tag, but if you have money to burn then this game is still worth a play!

If you are undecided on whether this game is for you, why not first try out the Demo here?

Enjoy our 9 Monkeys of Shaolin PC Review? Why not read –

Great! - A great beat 'em up title That any avid fan of the genre will love. Unfortunately, the story is incredibly short and the gameplay grows dull rather quickly.