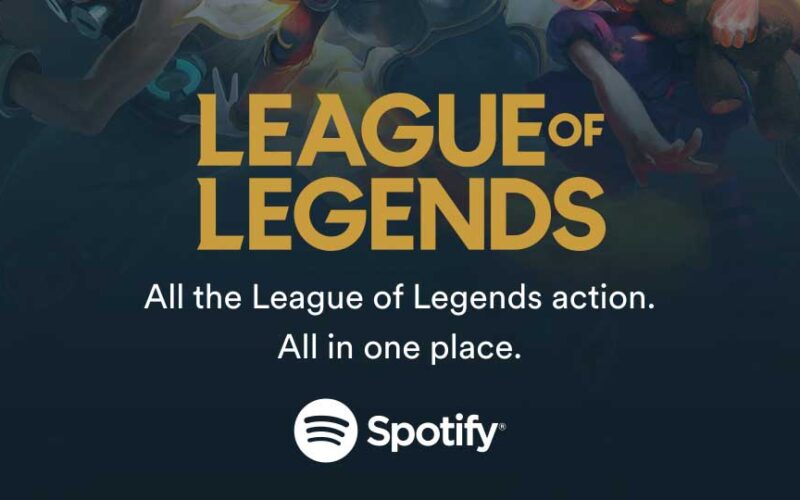 League of Legends has really grown over the years. It’s become a vital game in esports and gamers love the fantasy aspects. And now, there’s a Spotify exclusive League of Legends sound deal where it will become the sound provider for the game.

Read more in the official press release below.

In this first-of-its-kind collaboration, Spotify and Riot Games will produce a behind-the-scenes look at the making of the Worlds Anthem, develop various podcast series, create curated playlists, and launch a new LoL Esports Music Hub on Spotify. This Spotify exclusive League of Legends sound deal will reflect both brands’ commitment to creating quality digital content and memorable fan experiences.

“Our partnership with Riot Games will create a first-of-its-kind audio universe for the millions of Spotify and League of Legends fans across the globe. As the Spotify exclusive League of Legends sound deal, and first-ever, we plan to create the best possible audio streaming experience for our users, making discovering both music and podcasts easier than ever before,” said June Sauvaget, Global Head of Consumer and Product Marketing, Spotify.

“Music and story-telling have become an intrinsic part of our sport and game, so we are excited to partner with Spotify to provide our fans with another platform where they can enjoy a new manifestation of League of Legends esports,” said Naz Aletaha, Head of Global Esports Partnerships, Riot Games. “Powered by our shared commitment to innovation, this partnership with Spotify further unlocks our ability to merge sports, technology, and music to create unforgettable entertainment experiences and content.”

To provide an even richer Spotify exclusive League of Legends sound deal experience through music, Spotify will create curated playlists inspired by the LoL esports community. Drafting off one of the most anticipated songs in LoL esports, Silver Scrapes, which only plays ahead of the deciding game in a best-of-five series, Spotify also will serve as the presenting partner of Game 5, bringing fans to their feet during the most exciting moments during the LoL Esports Mid-Season Invitational and the World Championship tournaments.

Additionally, the Spotify exclusive League of Legends sound deal will give fans deeper access to the sport through several original podcast series. The first of these, “Untold Stories: Top Moments from Worlds,” aims to bring fans new insights about the tournament by highlighting one unique story from each year of the LoL World Championship.

The Spotify exclusive League of Legends sound deal will also provide fans with a behind-the-scenes look at creating the popular Worlds Anthem. Released annually leading into the League of Legends World Championship since 2014, Riot Games has collaborated with popular artists like Imagine Dragons, The Glitch Mob, and Against the Current to produce annual musical records that set the tone and celebrate the event.

Spotify transformed music listening forever when it launched in Sweden in 2008. Users can discover, manage, and share over 60 million tracks, including more than 1.5 million podcast titles. Today, Spotify is the most popular global audio streaming subscription service with 299 million users across 92 markets.

LoL Esports is a premier global sport that attracts the attention of millions of fans around the world. There are currently over 800 professional players on more than 100 professional League of Legends esports teams competing across 12 leagues globally. Each regional league is comprised of approximately 10 teams that compete against one another year-round over the course of two seasonal splits. Teams earn championship points in order to qualify for the two major international competitions: the Mid-Season Invitational and the World Championship. For further information, visit: www.lolesports.com.