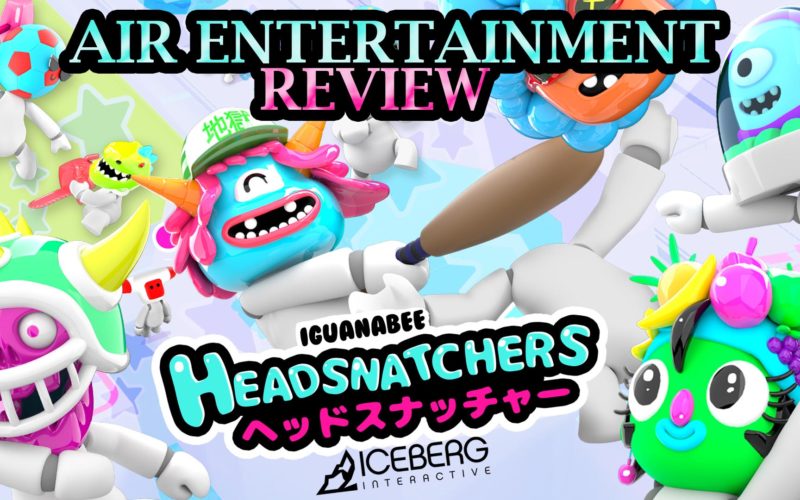 Headsnatchers releases today on the PS4, brought to you by IguanaBee and Iceberg Interactive BV. You may remember the publisher from other games we’ve reviewed, such as Gas Guzzlers Extreme Edition. This time, they’re bringing a fun party game for the entire family to play!

Already available on other platforms, this cartoon brawler finally arrived on the PlayStation console. Is Headsnatchers PS4 worth buying? Will you enjoy this action-packed multiplayer game? Read more in our Headsnatchers PS4 review.

Headsnatchers PS4 is a fun party game that features local and online multiplayer. The first few modes require at least 2 local players, which are Tornado and Tag Team. There is also a Roulette feature, where each player will spin a wheel to play a random map.

If you prefer the mayhem of online gaming, there is an online multiplayer mode. It presents the same maps and gameplay, simply with online players. I was sad to find out that you need PlayStation Plus membership to access the online features.

The only mode in Headsnatchers PS4 where you can play as one player is Zombie Castle. It’s almost like a 3D version of some of the Roblox games, where you need to jump and make your way through obstacles to the end. Of course, there are some zombies to battle along the way.

The most exciting part of the game is in the name. Your goal in Headsnatchers PS4 is to snatch the head off of your competitor. Each stage has a requirement for the head, depending on which map you select. You can either kick the head through goal posts or bowl it through a set of bowling pins. There is also a race map where you need to beat your enemy to the finish line while keeping your head on your neck.

Playing Headsnatchers on the PS4

IguanaBee made sure to keep the gameplay simple in this party game full of action. Headsnatchers PS4 features four main abilities. You can attack with two buttons, and jump and pick up objects with the other two. Finally, ‘R1’ is the main button that lets you deal with the head in the way that the map intends. As soon as you have someone’s head and you’re in the right position, press the special button to dispatch of the head quickly.

Each map in Headsnatchers PS4 comes with a special set of rules. You won’t have access to all the maps at once, though. As you progress through the game or play Roulette, you unlock new maps to try out. Some are harder to complete than others, but it’s all part of the fun.

You have to make sure you aim correctly in Headsnatchers PS4. There were some situations where my opponents (my children) and I would perform a special dash attack at the same time. It created a hilarious scene where we were merely dashing past each other for a few seconds. My daughter became wise, stood still and waited for me to dash, and politely lobbed my head off when I appeared next to her.

What would have made Headsnatchers PS4 more enjoyable is if you could allocate Bots for the free slots. You can only enjoy Tag Team if you have 4 players. It means that you’re at a loss if there are only 2 of you in the house, leaving you to play the other modes instead.

You can select any of the Headsnatchers PS4 default characters. There is an odd assortment of heads from which to choose. Of course, my children preferred creating their own characters.

Headsnatchers PS4 only allows you to make adjustments to the head. However, for such a small part of the body, there is a vast assortment of customisations to work through. It kept us busy for several minutes just browsing through the selections.

Iceberg Interactive’s Headsnatchers PS4 is the perfect game for replayability. Whether you play any of the local maps or online multiplier, the party game provides endless fun for you and the family to enjoy. There are new items to unlock, with a number of trophies for you to achieve.

The graphics in Headsnatchers PS4 look absolutely stunning. The character models remind me somewhat of Raving Rabbids, but with more creative design sets. IguanaBee shows their talent with exceptional attention to detail in every single map that they created. My only hope is that we’ll see more content in time to come.

Besides the funny plop you hear when the head pops off, the music in Headsnatchers PS4 suits the action of the game. Each map has its own soundtrack, which seems linked to the stage’s theme. There’s no talking, but each character will grunt or scream depending on the outcome. Also, enjoy some shotgun sounds when shelling some zombies.

It’s undeniable that Headsnatchers PS4 provides the ultimate party game experience for family members, especially during the COVID pandemic where we need more fun multiplayer games. It’s hard to find fault with a game like this, where you’ll find exceptional graphics with appropriate tunes. We need more games like this, one that will keep the kids laughing for days on end. We highly recommend buying Headsnatchers PS4, as it’s certainly worth buying for such a low price.

While there could be more 1-player game modes, Headsnatchers provides the ultimate multiplayer experience. With stunning graphics and thematic sounds, you'll love snatching the heads off your family and friends. The gameplay is kept simple, meaning you just need to focus on keeping your head.

Shaun M JoosteJuly 28, 2020While there could be more 1-player game modes, Headsnatchers provides the ultimate multiplayer experience. With stunning graphics and thematic sounds, you'll love snatching the heads off your family and friends. The gameplay is kept simple, meaning you just need to focus on keeping your head.8.5110
Your RatingUser Rating: 3.6 ( 1 Votes )
Previous PostAgeless Switch Review Next Post NBA® 2K21 Sets the Gold Standard for Music with its Definitive In-Game Soundtrack Developed in Partnership with UnitedMasters