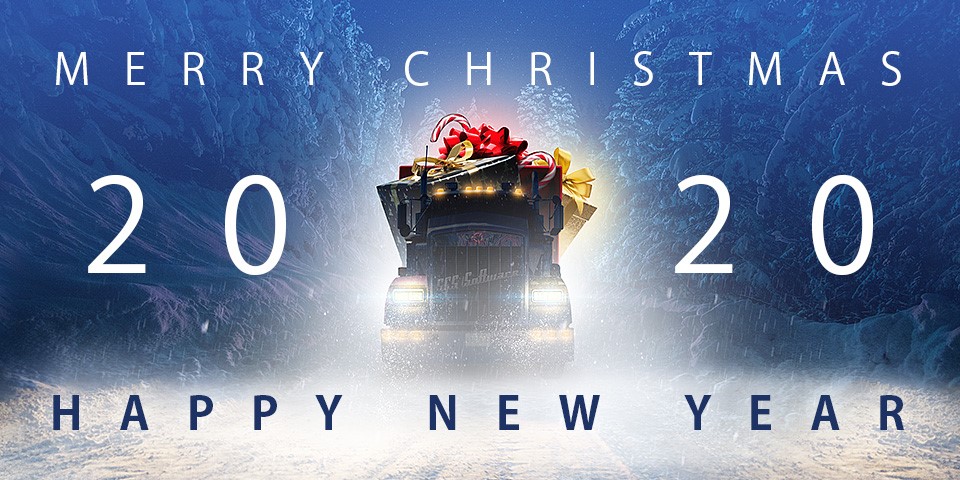 Euro Truck Simulator 2 (ETS2) has a new DLC! It is called Road to the Black Sea. It brings three new locations to an already busy map, including Lithuania, Latvia and Estonia, parts of western Russia, and the south of Finland.

Here are some of the new features as presented by the developers:

Exactly one month ago, I wrote a review on American Truck Simulator’s (ATS) new DLC, Utah. As with that review, this is the first time I am playing Euro Truck Sim 2 itself, so I was about to experience the entire base game and the new DLC at the same time. So you can treat this as a review of the Base Game and the DLC.

The DLC adds these new countries to your base game, which means news areas to explore and new landmarks to discover. If you’re like me and playing the base game for the first time, you start off as a Rookie, which means taking Quick Jobs and driving other companies trucks to do deliveries for them. When you can afford your own truck, you start using it to transport company trailers with cargo until you can buy your own trailers. Using your own equipment is highly beneficial and pays more, but can be costly. When you use company equipment, the company pays for repairs and fuel. Not so, when it is your own.

The skill line is the same as ATS. You get different skill lines that you upgrade with skill points as you gain experience. The more you improve skill lines, such as Hazardous Cargo, Long Distance, Valuable Cargo, the more you remuneration you will receive for high paying jogs.

Once you upgrade your garage, you can buy more trucks. Now why would you want to buy more trucks? Well, so you can hire drivers. Each driver is assigned their own truck. You pay a once off fee for the driver, and then for each job they get a percentage of the income. You also need to pay for their fuel and repairs. They have the same skill tree as you, but you get to choose what they should be trained in. So if you tell them the focus is Long Distance, that skill will improve as they complete jobs, meaning they will bring in more income.

The customisation for the trucks and trailers is insanely huge. There are so many parts that you can upgrade and buy parts for. And upgrading engines and parts is especially important if you want to carry heavy cargo, which brings in TONS of income (haha).

I truly love playing ETS2 with the Xbox controller. The keyboard seems to lack the proper response to certain situations. When you turn, if you just want to turn slowly, the steering wheel seems to tap to the side in a jerking fashion while you try and maintain your course. The controller is much more smooth with the analogue sticks. Also, key buttons for wipers and lights can be found more easily on the controller, while you have to make sure you press the right letters for each.

I’m in love with the graphics. Especially when you bump everything up to maximum quality (yes, I learnt my lesson since my ATS review). Especially the day cycle and weather system. I am a pluvophile, which means I intensely love the rain. I work better and love life more when it rains. Now, I know it is just a game, but watching the rain fall on my truck’s windscreen in the game is amazing. Driving at night is such an exhilarating experience, and the internal and external lighting system is beautiful.

Which lends itself well to the Photo Mode. The Mode allows you to take photos of your truck and surroundings, which you can share directly to social media. Sometimes you can really find gems of photos to take, that will really leave you breathless.

This brings me to the next section. The whole online Trucking Community. While playing ATS, I discovered that there is a whole community dedicated to online Trucking. It is apparently a very huge thing. I am now a member on their Discord server, which serves players for both ATS and ETS. You can also join World of Trucks (WOT), which aligns to both games. Once you have that profile, you can accept contracts from other players and servers and see others riding on the highways. You can use a mic to speak over the radio to fellow truckers. Feel free to also upload your saved photos to WOT. You may see it featured on your screen during one of the loading screens.

This makes ETS2 simply fantastic to play. There is such longevity to this game. There are so many milestones you can aim for. That first truck, that first trailer, that first driver, hitting all the achievements, truck parts, upgraded garages in each city, becoming a billionaire… the list is endless. I thought Elder Scrolls Online would be the only game that would keep me coming back, but ETS2 is my new choice. I know it may not sound all that exciting to many, driving along roads for hours on end, but I really really love it and it is truly addictive.

So, for ATS players wanting to know what is different with ETS. Well, I had to get used to driving on the left side of the road, which is what we do in my home country of South Africa. The reason I had to become used to it is because I have clocked so many hours for ATS I had become accustomed to driving on the right. Which caused a few issues at the start until I became used to the new way of travelling.

The main game screens, such as the main garage where you set everything up and work on your trucks are all very similar. Which is great for ATS players moving over to ETS. Obviously, you will be treated to new sceneries. And traffic lights that change from red to yellow to green when it is time to ride (please bring this to South Africa!!). I must say that at the moment I have a huge preference for ETS over ATS. Mainly a small personal bias, since most of the systems are like what we have in my country, most of my friends are in the U.K., and I get to explore Europe!! With two different landmasses.

Now let’s spare a moment for the DLC. Should ETS2 owners spend USD $17.99 / EUR €17.99 / GBP £13.49 for ETS2? Short answer: hell yes!! With three new main locations, new landmarks, new assets, how can you not?! Especially if you already enjoy ETS2, I don’t understand how you have not bought it already. You also get to explore some Russian territory, taking you out of your Europe comfort zone. There are new company docks, new industries and new jobs to explore.

As you can tell by my review, I really really love ETS2. With ATS, I already became addicted to Trucking Simulation. Plugging into a television and using the Xbox controller, I feel like I am playing on console. There are so many ways you can enhance the gameplay for yourself, and with the online community, you really feel immersed in this world of trucking. It has given me a new perspective and appreciation for truckers all over the world.

And because I love this game so much and personally can’t find any fault with it, I am giving it a merry Christmas by delivering a whopping 10/10. Yes, I know ETS2 is no Death Stranding, which deserves Game of the Year, but ETS2 and the new DLC really stand on their own when it comes to Trucking Simulation.