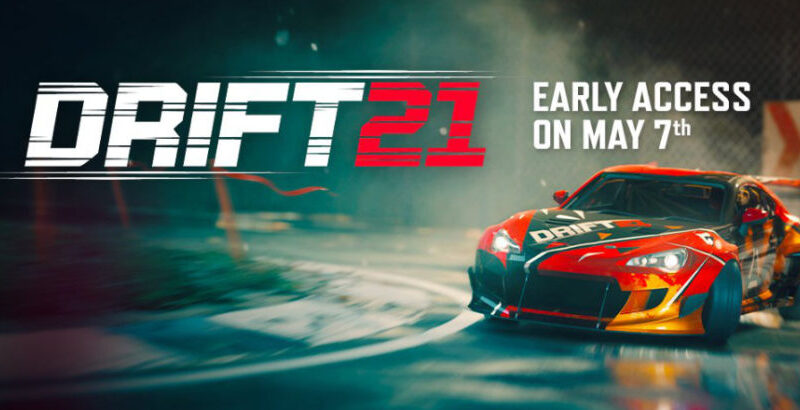 We’re excited to present our Drift21 Preview to you. ECC GAMES S.A. has been busy with this drifting race simulator for a few years now, the Early Access becoming available on 7 May 2020. We took the game for a spin on PC with the Steam version.

We had an exciting interview with the developer on 18 May 2020. Since the launch, we’ve seen new tracks, cars and upgrades in the game. We’ve personally witnessed the team’s passion for drifting, which is why we waited a bit before writing our preview.

Which tracks and cars are available, and is it easy to handle the cars? What is the garage for and can you race against others online? Find out more in our Drift21 Preview.

Our Drift21 Preview comes at a time where the game still has a long way to go to completion. With every update, there are new cars, new tracks and new modes to play. It’s only single player at the moment, with no NPCs to race against.

It’s just you, your car and the track. There are different modes to try, such as checkpoint missions, time trial and solo run challenges. You can choose different settings for each track, picking a car and objective before you hit the track.

Of course, you’ll need to build your car first. You’ll buy one of the few cars available with the small amount of cash you start with right at the beginning. That’s when the action started for us in our Drift21 Preview.

You stand in your garage and can buy new parts. You physically have to remove old parts and put the new ones in if you want to upgrade the vehicle. We felt a bit like Toretto in Fast and the Furious, lifting the car up in the air and working on pieces to see how we can get more power in the beast.

For our Drift21 Preview, we discovered that there’s a massive learning curve. Not only in the garage but out on track too. It’s not just about drifting, but also about how to hit the apex and spin that back tire into the hot zone.

It’s all about mastering your drift and controlling your vehicle. You’ll restart the track over and over until you finally get it right. When we began playing it for our Drift21 Preview, we must have restarted more than a dozen times.

It was only later that we realised our mistake. The tracks are presented in a specific order for a reason. The first track is designed for the standard vehicle, with missions and objectives for the casual street car.

We went straight to the third track which was for advanced vehicles and setups. It was only when we paid attention to the power requirements and the checkpoint objectives that we realised it. Heading back to the first track, we aced the missions first time.

The garage has an even steeper learning curve. If you know nothing about car parts, get ready for an education. When you’re working on a vehicle, you only pay for a part the first time. After that, you can store parts in your garage’s inventory.

We loved the cleanup setting. If you’re learning like us for this Drift21 Preview, then you’ll have parts lying all over the garage floor. Don’t worry; click on the cleanup button and all the parts are stored in the inventory.

Moving parts in and out of your car is easy. It’s knowing what parts go where that’s challenging. Fortunately, the game guides you as much as possible. You can even build an engine piece by piece from scratch!

Turning to the graphics portion of our Drift21 Preview, the visuals are utterly amazing and realistic. It’s better than any racing title I’ve ever played, including Need for Speed. it could be because the tracks don’t have much detail on them, but we’re definitely impressed with the imagery.

The same is said for the garage. Each part is painstakingly brought to life with precise detail. When you’re missing a vital piece before you can go to track, the game highlight’s it in red. The developer has made sure that the graphics plays as much a role in your enjoyment of the game as possible.

We also enjoyed the sound aspects for our Drift21 Preview. As we place turbo components on the engine block, you can hear the difference when you rip up the track with your drifting. Hit the clutch and power on those wheels into the corner, and you’ll hear the satisfying sound of rubber on tarmac.

If you can’t tell from our Drift21 Preview above, we’re already in love with this game. The beauty of it is that the developer just keeps adding more tracks, cars and content to this game during Early Access. While there are no NPC drifters, gymkhanas or online multiplayer yet, the game is already a winner for us and has so much potential for more.