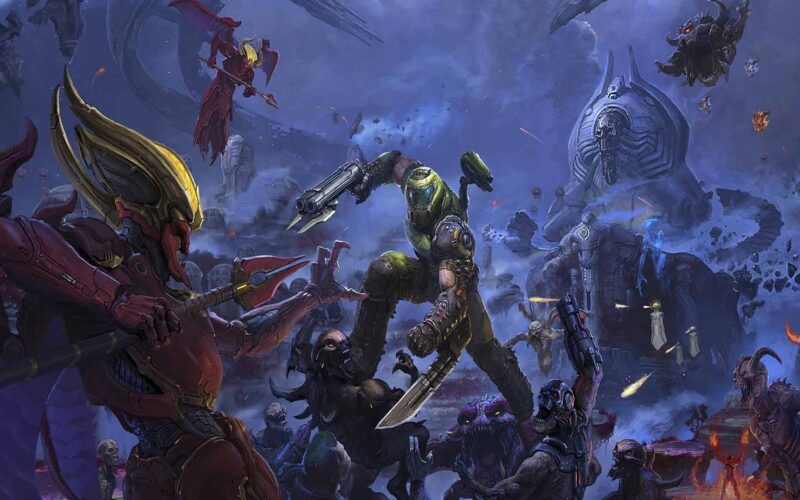 At the recent online QuakeCon At Home, Bethesda announced that there will be the very first DLC for our beloved horror game, called DOOM Eternal The Ancient Gods Part One. We completely loved DOOM Eternal, as you can see from our DOOM Eternal review.

Here are some details of the game, as well as the DOOM Eternal The Ancient Gods Part One trailer.

Within DOOM Eternal The Ancient Gods Part One, your victory over Hell’s armies pulled humanity back from the edge of extinction, but it came at a cost. An imbalance of power in the heavens requires the true ruler of this universe to rise and set things right. Wage war across never-before-seen realms of the DOOM Universe and fight against new demons in your never-ending battle against the forces of evil.

As you can see, there will be new realms and new demons to discover in DOOM Eternal The Ancient Gods Part One, which makes us really excited. But what’s even more exciting is the announcement that next-gen consoles will receive DOOM Eternal upgrades free.

Players who own or purchase either title on Xbox One or PlayStation 4 will be able to upgrade for free to the Xbox Series X and PlayStation 5 versions, respectively, when those versions are available. Additionally, Bethesda teams are working hard to ensure both titles will support backwards compatibility when the new consoles launch.

Bethesda will provide more information to share in the coming weeks and months about The Elder Scrolls Online and DOOM Eternal on Xbox Series X and PlayStation 5 including expected release windows and a list of enhancements. And while the publisher doesn’t have any news to share just yet on their remaining catalogue of titles, they did confirm that they are committed to offer free upgrades for current-generation console owners of existing Bethesda titles that they bring forward into the next generation of consoles.

Our Thoughts On DOOM Eternal The Ancient Gods Part One

We’re exceptionally excited to get our hands on DOOM Eternal The Ancient Gods Part One, although there isn’t that much information right now. We’ve been playing DOOM since the very first game launched, and I personally haven’t missed a single game in the series.

The DOOM Eternal The Ancient Gods Part One announcement builds excitement of course, but I also want to know more about Elder Scrolls VI. Elder Scrolls Online has been keeping my desire for Elder Scrolls content alive, but I really want the next game in the series.

Going back to the first DLC DOOM Eternal The Ancient Gods Part One, we’re wondering what type of content we’re going to get. There’s mentioned of new demons. Will this be upgrades of current demons, or will there be completely new ones? Are the hybrids of demons? Will we eventually see some angels too? (Oh no, wait, that’s the Diablo series, haha).

I’m personally obsessed with games that have Bestiaries. I remember asking the Bethesda gentlemen if I could create DOOM Bestiary books that I could publish via my publishing company, Celenic Earth Publications. Or was that to create a library of the paperback books found in Skyrim? Either way, I wasn’t as fortunate as I was with Konami in writing my Silent Hill novels.

Ok, I’m straying from the point a bit. DOOM Eternal The Ancient Gods Part One looks exciting and I really hope I can get my hands on it. It’s been a while since I’ve blasted a demon in its face, and the DOOM Eternal really impressed. I hope they use the same formula that makes playing DOOM games so awesome.