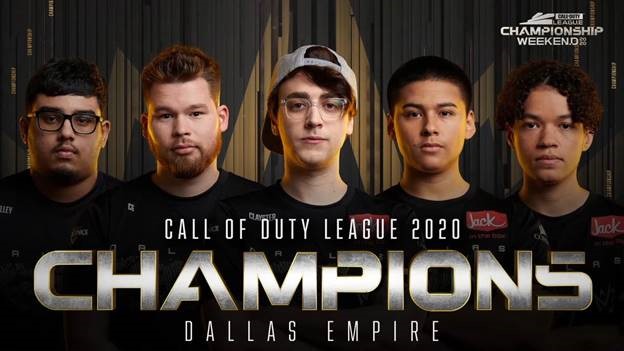 This weekend saw the amalgamation of the COD League Championship 2020 at the Championship Weekend. Four teams remained and, after four intense matches, we finally saw Dallas Empire earn their championship rings and come out on top.

Activision has shared some news about the event in a press release to us. Read about it right here!

The COD League Championship 2020 Weekend opened with the Elimination Bracket, which saw the Chicago Huntsmen face off against the London Royal Ravens. This hotly anticipated match saw Europe’s only team take on fourth-seed, the Huntsmen. In a nail-biting match with all to play for, it was Chicago Huntsmen come out on top, in a 3-1 victory, bringing Europe’s dream of the finals to an end.

Next in the COD League Championship 2020, we saw the two top teams, Atlanta Faze and Dallas Empire, who have played consistently well this season come head-to-head fighting it out for a place in the final. But it was second-seed, Dallas Empire, that proved to be the better team, winning 3-2 and putting one more match in Atlanta Faze way in order to reach the final.

The final match of the day at the COD League Championship 2020 was the Eliminations Finals with Chicago Huntsmen and Atlanta Faze both only one win away from the finals. These two top teams fought it out valiantly but ultimately Atlanta Faze secured a 3-1 win sending them through to Sunday’s final.

After 8 months of competition in the COD League Championship 2020, it all came down to the Sunday final, with Dallas Empire and Atlanta Faze only one match away from winning and the largest part of the $4.6 million prize pool. After some impressive gameplay, it was Dallas Empire who were crowned winners of the 2020 CDL Championship, winning the Championship Final Best-of-nine series 5 – 1.

More information can be found in the After Action Report on the CDL website.

Fans can get in on the action by voting for their COD League Championship 2020 All-Stars from now, with two players from each team being selected by fans.

The COD League Championship 2020 regular season MVP and Championship Weekend MVP will auto-qualify for the event with the final six stars being selected by Call of Duty League’s on-air talent.

Voting ends on September 3. To learn more about the event and how to vote for this year’s Metro by T-Mobile All-Star Weekend roster, visit CallofDutyLeague.com.

About the COD League Championship 2020

The Call of Duty League is a global, city-based esports league composed of 12 professional teams, representing 11 markets across North America and Europe.

In its inaugural season, pro teams compete in 5-versus-5 Call of Duty®: Modern Warfare multiplayer matches, on PlayStation®4. The professional competition features the best Call of Duty esports players from around the globe, battling for the ultimate prize: the COD League Championship 2020.

Visit CallofDutyLeague.com and follow the Call of Duty League via CDL Twitter, CDL Instagram, CDL Snapchat and CDL Facebook for more information and the latest updates related to the CDL, including the latest league standings.

For live broadcasts and Video on Demand, visit https://www.youtube.com/user/OfficialMLGCoD