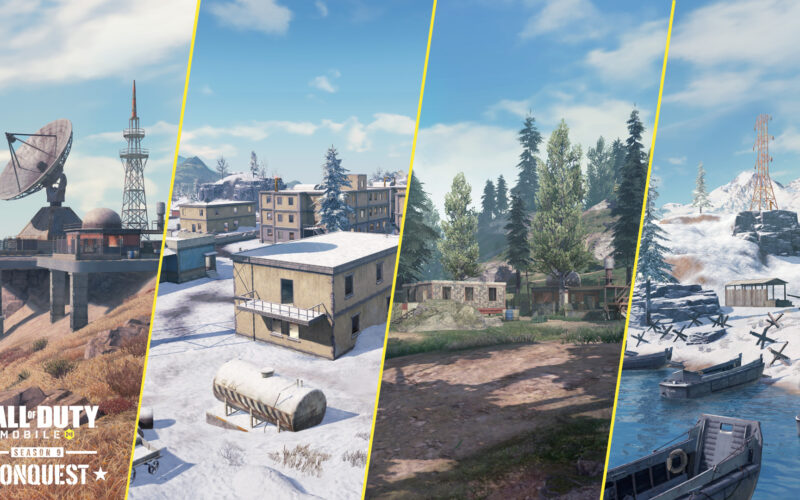 In a new and exciting announcement that Activision just sent us, Call of Duty Mobile Season 9 Conquest has begun! With this announcement, there is so much news to share as to what to expect this season. The season officially started 16 August 2020, and we’re excited to share what’s new.

Call of Duty Mobile Season 9 Conquest – Back To WWII

Call of Duty Mobile Season 9 Conquest starts off with Victor Reznov introducing the WWII battlefields. There is also an origin story for the Nova-6 gas. The Shipment battle map is also back!

Here’s a list of some of the new features:

Those who obtain the Battle Pass for Call of Duty Mobile Season 9 Conquest will receive some exciting new items. There are new characters and weapons, besides other things. Here are some of the details.

At Tier 14, all players will unlock the new Shield Turret Scorestreak — hunker down with it in a high traffic lane and blast enemies from behind its built-in cover. Reach Tier 21 in Call of Duty Mobile Season 9 Conquest to obtain the Kilo Bolt-Action, a new functional weapon with excellent mobility and one-shot kill potential. Other free tier highlights include the rare RUS-79U – Obstacle (Tier 36) and BY15– Obstacle (Tier 41), plus the Toy Soldier weapon charm at Tier 46.

Purchase the Call of Duty Mobile Season 9 Conquest Premium Pass to potentially unlock all of the content available in the Conquest stream. Start the Season strong with series-favourite Victor Reznov unlocked right at Tier 1, followed by the notorious Richtofen at Tier 12. Earn epic weapon skins like the QQ9 – Trendsetter at Tier 40 and the Kilo Bolt-Action – Lazarus at Tier 50. Also unlocked at Tier 50, an awesome new skin Nikto-Stronghold and the legendary calling card – Take Cover will prove your dedication to the fight.

The new Gunsmith feature adds a deep layer of customisation to all weapons, with over 50 new attachments, 20 new reticles, and 60 weapon levels.

Level up your weapon to unlock attachment options across a variety of categories, including Laser, Stock, Rear Grip, Barrel, Optics, and more. Equip one attachment per category with a maximum of five total attachments for major customization power. Improve your weapon’s handling speed, damage range, or movement speed while aiming down sights — the options are nearly endless.

Gunsmith adds new weapon cosmetics, too! Equip weapon charms, one per gun, to add extra personality to your loadouts, and while you’re at it slap some stickers on your weapons, with the ability to attach multiple stickers per gun.

Call of Duty Mobile Season 9 Conquest brings new Seasonal Challenges for even more earnable content, including the new Amped perk. Amped improves your weapon swap speed and rocket launcher reload speed, perfect for taking down air support in the blink of an eye.

Later in Call of Duty Mobile Season 9 Conquest, unlock the new Thermite lethal. The Thermite sticks to surfaces upon impact and burns violently for several seconds, inflicting periodic damage to enemies in the immediate area.

With the addition of Gunsmith, players will be able to unlock a new item in Seasonal Challenges: blueprints. Blueprints are developer crafted weapons designed for a distinct playstyle. Blueprints often feature attachments that have yet to be unlocked and can help players better understand the range of weapons capabilities. Earn some blueprints and test them out in Call of Duty Mobile Season 9 Conquest Multiplayer and Battle Royale and maybe you’ll get some ideas to craft some of your own epic creations in Gunsmith.

The fan-favourite Shipment 1944 is now live on Call of Duty Mobile Season 9 Conquest! Controlled chaos at its finest.

This tiny map takes place in and around supply crates waiting for pickup at the beach, with crossed lanes merging players together in the centre and an outer perimeter where the fighting never stops. Prime your grenades to take out those pesky LMG campers and keep up the pressure as you land kill after kill.

Watch out for the open crates scattered throughout the map in Call of Duty Mobile Season 9 Conquest. Clear out any enemies inside and take up their position to greet them with your barrel when they come rushing back.

Check out Activision’s Mobile Map Snapshot: Shipment 1944 article for in-depth tips and tricks, whether you’re a Shipment vet or joining in on the chaos for the first time. Welcome to Call of Duty Mobile Season 9 Conquest!

The Battle Royale map expands again in Call of Duty Mobile Season 9 Conquest with four new areas to explore: Outpost, Dormitory, Radar Base, and Campground. Keep your eyes open in these new locations and around the map for the new armour plate item. Use the armour plate to repair damaged armour, helping you to stay in the fight for longer periods of time.

All weapons in Call of Duty Mobile Season 9 Conquest Battle Royale support the new Gunsmith feature, as well. Lootable weapons now come pre-equipped with attachments, no more scavenging for the perfect scope. The higher tier (Rare, Epic, Legendary) the weapon in Call of Duty Mobile Season 9 Conquest, the more attachments it comes stocked with. Legendary and sometimes Epic blueprint weapons can include Gun Mods. Gun Mods provide a bonus or buff to the weapon in addition to its standard capabilities.

You can prepare your own weapons in Call of Duty Mobile Season 9 Conquest, too. Create up to five custom weapons in the Battle Royale menu and retrieve them during the match by calling in an airdrop.

Help liberate Europe by selecting either the Eastern or Western front in the Finest Hour event. Build up your troop count every time you upgrade a weapon in the new Gunsmith system, and then use those troops to attack Axis occupied cities. Earn epic weapons and characters for successfully breaching these cities.

Prepare for massive engagements with the introduction of 10v10 Team Deathmatch and Domination. You thought Shipment was crazy before? Wait until you play it 10v10, also featured on Takeoff, Meltdown, and Crossfire.

One thought on “Call of Duty Mobile Season 9 Conquest Begins”