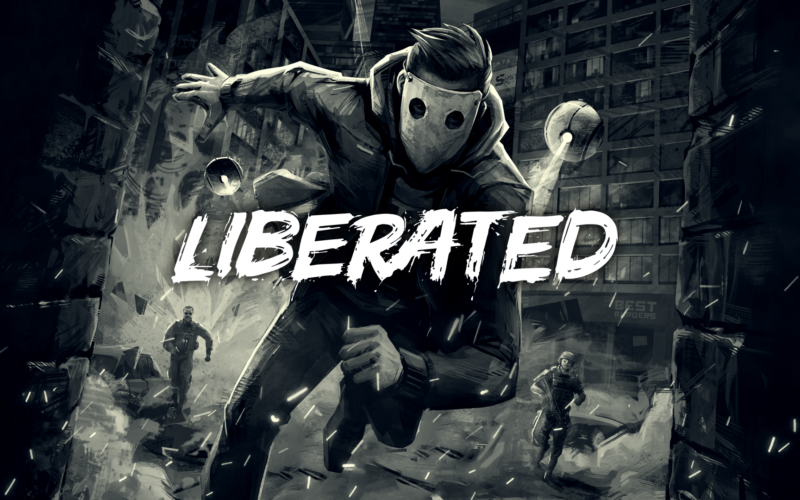 Liberated Capitalises on Switch Success With PC Release. Out Today!

Two months ago Walkabout games, Atomic Wolf and L.inc teamed up to act on their vision of bringing comic books to life in the form of a Comic/Video game crossover. The resulting title, Liberated, would see great success on the switch digital market – Where it was exclusively available.

Along the way, Walkabout games have worked very closely with their fans. Allowing the fanbase to heavily influence the changes made to the very unique title. Including the addition of voice acting due to high demand.

Following on from this success on the switch, L.Inc and Atomic Wolf have optimized the game to bring it to a PC market.

Hey everyone, this one is a longer and slightly different post. Tomorrow is a big day for us. Liberated is finally coming out on PC!

We’ve been here together for many months now, joking and talking about the game. We’d like to thank you for staying with us for all this time. ❤️ You are all an amazing community!

Liberated has been in the making for several years now. It started with the idea of a “better” digital comic. Like most folks, we slowly stopped buying paper comics and tried to replace them with digital ones — the cost and convenience was unmatched, but it really wasn’t the same.

So if we can’t replace paper comics, maybe we can improve digital comics? We researched what makes comic books tick, if not the paper—then what is the *essence* of a comic book, and why are they so damn nice to read?

Spoiler alert: it’s the way our eyes move across the pages and focus on details, the way the texture of paper becomes part of the art, even the way you start with a beautiful cover before you dive in.

So the first thing we did was simulate all those little details, and then we added layers upon layers to it without ever compromising that essence.

Then came the world and story, and it’s obviously very personal. Somebody once called Liberated a “collection headlines from around the world”. We—as in, the human race—are in a weird place right now and who knows where we’re headed. We decided to tell a story that’s grounded in this reality, shocking and unbelievable at times, but hardly science-fiction. That’s the point.

So we’ve been chopping away at this strange experiment of ours, we’ve learned so many lessons, made a ton of mistakes, scrapped things, started over, and in the end we’re so incredibly proud of every single step and person that was there along the way.

It’s tough to say everything in one post and not get too mushy about it, but just, man, thank you all for everything.
Tomorrow is a big day, and we can’t wait for what comes next!

The story takes place in a nameless “new world”. Where the government can identify people through face recognition, Social media usage as well as other methods. This was originally enforced to protect the people. Using information gathered to detect crime before it had even happened. But that soon changed.

The game presents you with two sides to the story. There is the perspective of the ‘Liberated’, a resistance group regarded widely as nothing more than terrorists, And the Police Force, Namely Captain Frank Roberts.

The game holds a discreet real-world message. Although taking part in an unnamed dystopian world where big brother watches your every move. throughout the whole journey, you begin to find similarities to the one we live in now. A possible prediction into what the future could hold – And it’s a frightening concept.

Excerpt from our Review, Which can be read here.

Liberated Can be purchased on Steam at approximately 4pm GMT on July 30th.