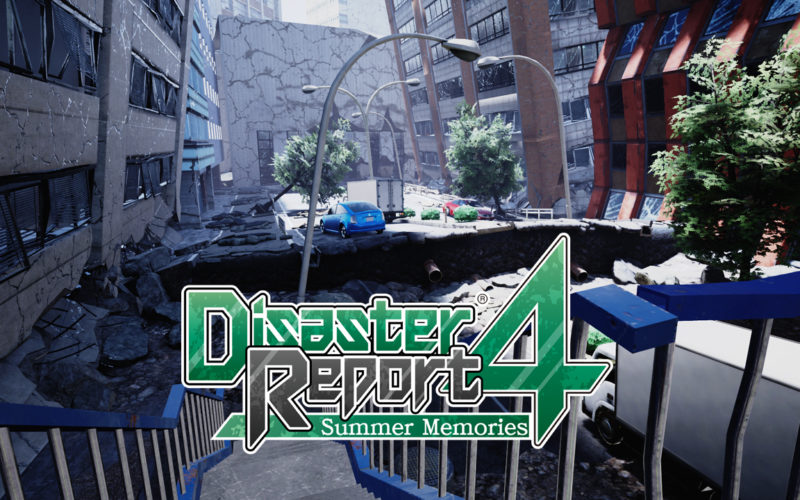 Initially developed back in 2010 for the PlayStation 3, Disaster Report 4: Summer Memories is a survival game set in the aftermath of a massive earthquake in Japan. Initially set to release on March 10, 2011 it ran into delays. After the massive Tōhoku earthquake and tsunami hit Japan on March 11 the game was cancelled a few days later.

Eventually in 2014 the game revived. Eventually in 2018 the Japanese market got a release. Move forward to 2020 and the West finally get a release. Unfortunately its tied in the yet another disaster, Covid-19. Could the game have really been plagued with disaster from the start?

Luckily the game doesn’t really focus on the disaster but more the charming stories of everyday people rising to action in the face of imminent danger as they seek to help each other. It feels like this is the perfect time to release such a game. When our world is facing a crisis as we are, moments of human fortitude and survival is what we all need. We all need some form of uplifting message right about now.

The Disaster Report series may be a relatively unknown title to most. A lot of people outside the East have only seen a small portion. The series has been released locally under different names by numerous publishers. Focussing on survival simulation as well as a narrative role-playing we were usually brought over the top scenarios. This then brought some great tales of adventure as well as intrigue.

Disaster Report 4 seems to have toned a lot of that down delivering a lovely tale. That tale being simply about a Japanese city caught in a massive earthquake. Its all about how people pull together in order to survive the after shocks. Sometimes it is a great idea to dial back the over the top stuff and focus on the basics.

The game starts with your character on the bus heading into the city. From the opening moment onward it is up to you to shape your characters background and motivation. There are frequent moments of quiet contemplation where you can select up to 8 dialogue choices. It leaves the game open to how you would personally respond if you were caught in the same disaster.

The earthquake strikes. The bus is flipped and you find yourself crawling from the wreckage. The first view is of a city transformed by the scenery that once shaped a much different view. Further aftershocks causing more buildings to collapse, roads to crack open and sadly, the death toll to rise. During your journey you will meet a variety of characters who react to the disaster in ways you would probably expect most to do in life. People with their mobile phones out recording the disaster rather than helping so they can have their 5 minutes of internet fame. Store workers who drive the prices of goods through the roof. People who are willing to help others as well as those just wondering in bemused states.

Your personal story is whatever you choose to make it. Do you want to be the selfish type who is only out for themselves as (I fear) a lot of the world is at the moment or will you take the time to help others out as best you can?

You will notice right from the start, this game does not hold your hand. I spent a lot of time blindly running around the scenery trying my hardest to figure out what to do. You can come across other characters which will ask you to help with what can be classed as side quests, but voiced in Japanese it can sometimes become rather confusing.

Guided by a compass in the bottom right of the screen when sifting through the rubble you can come across different compasses to equip. This really doesn’t add anything to the game and seems to be an unbelievably pointless addition. That coupled with the seemingly emotionless main character doesn’t really bode well for the game. The real heart of the game comes from the various NPCs that you encounter along the way. Their stories add well to the overall game.

Stories such as a teacher discovering her personal bravery whilst helping her students survive. A street performer singing for survivors in the rubble to keep spirits high but being chastised by a passer-by. They all add a sense of reality into how people would act if this scenario were to happen.

Flaws in the architecture

Unfortunately these back stories don’t make up for a bad base. The controls feel clunky and not very natural. The frame rate is awful and that last throughout the game made worse when aftershocks happen and you view buildings falling. A whole host of lighting issues as well as texture pop ins make this feel like little has been done since 2011. This shows badly in the overall graphics.

The survival systems in place within the game don’t seem to ever impact either. Stress, hunger as well as others never played a part in my hours of playing the game. It would be easy to ignore these flaws if the game were more polished. Unfortunately it isn’t. The stories that do shine through are outweighed by the issues in the game. More than I care to imagine my game mainly consisted of blindly running around the areas looking in every corner I could before an extended loading screen would kick in.

You can take on this game in VR which does give a great first person perspective throwing you into the action. The problem is that it doesn’t work as well as a lot of other PSVR games and they have really missed an opportunity with the title. What could have been great falls as hard as the buildings in the Japanese city.

What could have been a great game suffers with some terrible issues as well as clunky exploration. The charms of the game are hidden beneath the bad unfortuantely

AndiJune 1, 2020What could have been a great game suffers with some terrible issues as well as clunky exploration. The charms of the game are hidden beneath the bad unfortuantely5.5110
Your RatingUser Rating: 1.5 ( 1 Votes )
Tagdisaster report 4
Previous PostLiberated [Switch Review] Is it worth it? + Dev Q&A Next Post Civilization VI (2020) Review - Frontier Pass