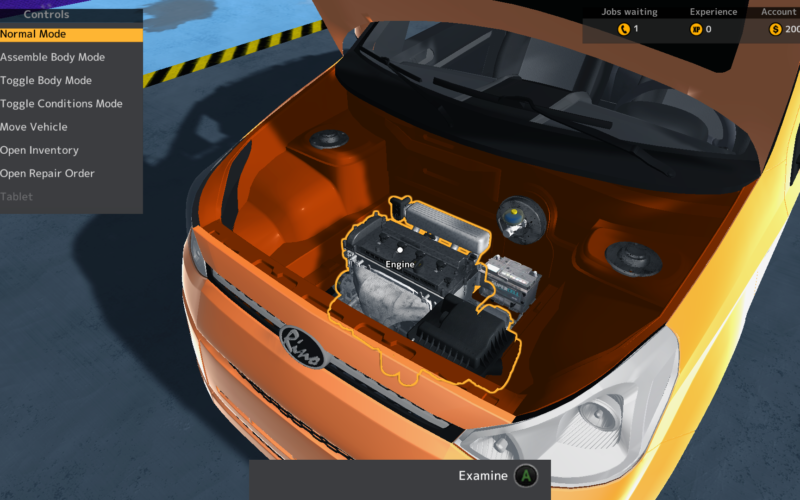 First off I want to make it no secret that I’m not a big fan of simulator games – except for Goat Simulator (but who doesn’t love that!). So when I was given a copy of Car Mechanic Simulator Classic to review I felt a bit apprehensive, to say the least.

The first thing I need to talk about here is the control system, it’s overly complicated and very confusing at first, having to move to each option with the D-pad and then select with “L2” isn’t as intuitive as it should be for this kind of game. In fact, it sometimes becomes a chore just to examine the car for the faults you’re looking for and it’s all very clunky, but stick with it and it becomes more accessible as you get more confident in what you are doing. Now I don’t know much about where and what parts are in the engine… so when I took the job to replace a crankshaft doo-hickey I started to merrily rip out engine parts one after the other only to then realize I just needed to put the car on the lift and take out a couple of bolts from under the engine block, but at least now I know where a fuel filter and brake servo are!

The jobs to take are entirely up to you, the phone rings and upon answering you’re given the option to either accept or decline the customer. The tasks on offer can be anything from an oil change to a complete suspension or engine rebuild. When you’ve examined your customers’ vehicle and found its faults you then have to order replacement parts on your computer, here you will find everything from oil filters to body panels… If you stick to basics for a few jobs and get used to the fiddly controls, you will find that this is a tidy little game that you can learn a few things from. You learn how your car works and also find that sometimes it’s the small things that give you the biggest headache.

For me, the graphics aren’t up to the current-gen standard. In fact, I’d say that it looks closer to Xbox original graphics than it does Xbox one graphics. However, as an indie gamer, I don’t have as much of an issue with this as some would.

One thing I suggest you do is to turn the music off… at times it sounds like you’re in a digital watch factory in the late ’80s. Some nice tunes would’ve gone a long way to set a more conducive atmosphere to concentrate on the work in hand but at times it’s as welcome as a wasp at a picnic.

Like most simulator games, Car Mechanic Simulator Classic is absent of an actual story to progress through. Instead, you are working towards making as much money for your garage as possible.

The game does give you a sense of progression despite not having a linear story to run through. Because you are essentially writing your own story in-game. And this progression is beginning on easy jobs such as changing the oil in a car and eventually moving on to a complete engine overhaul. The sense of achievement when doing your first big job is incredibly satisfying.

So to conclude, Car Mechanic Simulator Classic is flawed but it has charm and is a relaxing game to play. If you can persevere with the at first confusing menu system and you want a game to wind down in between other games then it is well worth the pop. if like me you’re not big on simulator games then this is a nice entry-level into that genre. Go on, give it a go… you just might like it!

Car Mechanic Simulator Classic is flawed but it has charm and is a relaxing game to play. If you can persevere with the at first confusing menu system and...