Our Wanking Simulator review looks at an interesting action, mature, comedy game that views the personal sexual activity in a new light. The game launched on 19 March 2020 on Steam. MrCiastku is the developer with Ultimate Games S.A. as the publisher.

I went into this game with an open mind (or an open palm?), wondering what I was getting myself into when I started it up. We’ve reviewed other titles by Ultimate Games S.A., such as Demolish & Build 2018 and Fishing Adventure. This Wanking Simulator review is by far and large the strangest request we’ve had to test a game.

So, did we enjoy the action mature game? Is it heavy on nudity and sex, and what is the game about? Read more about it in our Wanking Simulator review below.

You are Winston Gay, and you love in Gay Town. If there’s any specific reason this action game is so ‘Gay’, I’m missing it for my Wanking simulator review. The primary plot revolves around the government taking your house from you, which upsets you enough to go on a wanking rampage.

Each map has a specific set of missions. Find the Bible in the Church and give it to some shady dude. Enter the hospital and then take care of some terrorists. For someone that’s raging to hurt everyone, Mr Gay sure spends a lot of time doing things for other people.

Overall, there’s a central story and side missions, but you’ll be so busy kicking the crap out of everyone and wanking over their still bodies that you end up forgetting why you pulled it out in the first place.

When you start the game, you’re already nude and ready for action. The main combat abilities are kicking people into oblivion and wanking over them. Sure, we found some weapons later for our Wanking Simulator review, but you’ll do ok with your lower appendages.

You can think of the gameplay as an open sandbox mode, where you can run around and destroy anything you want. Blow up cars, send a policeman skyrocketing above you, and just create utter and complete chaos. It’s like GTA on steroids with no meaning.

Of course, everything is designed around the wanking mechanic. You build up your orgasm by wanking over people you’ve knocked out or performing some other disgusting acts. There’s an eagle vision of sorts too to help you find items. You can even grow a cumtree/bush by feeding it your, yes you guessed it, sperm.

Of all the elements in our Wanking Simulator review, the graphics stand out the most. The design is incredible as is the draw distance. Even the fauna and characters look amazing.

Until you kick them… Then they fly around like dolls, which I guess is just part of the comedy. Oh, and ladies, if you thought you could look down and see Mr Gay’s mighty sword, think again. The hand jerks off at an incredible speed, but the motion is blurry, hiding the almighty tool.

There’s also no sex or nudity. The publisher makes it quite clear on Steam that it doesn’t provide that kind of content.

The sound is also excellent. You’ll hear fapping noises as you go at it, and the NPCs will groan as you kick them and the public will cry out loud when your jerking off near to them. Explosions go boom and policeman sound their sirens. It’s also fantastic that they have some voice over acting, which shows how much effort they put into the game.

For our Wanking Simulator review, the game was enjoyable for a few hours, and will keep you going if you’re intending to complete the missions. I found the objectives incredibly hard to finish, and it felt near impossible to pass the first stage. However, it’s hilarious action to play with friends and have a good laugh. 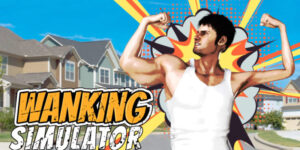 Our Wanking Simulator review looks at the exciting thrill of kicking people around on a sandbox map and getting their jolly off. Read more right here!