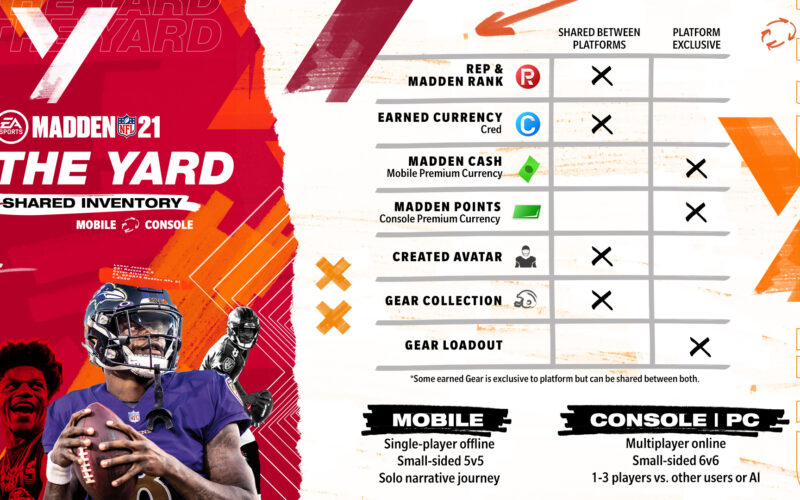 Today, EA SPORTS announced a brand-new way to play in Madden NFL 21 with The Yard – a fun, dynamic mode for players to experience backyard football with fast-paced, small-sided gameplay. In this exciting new feature, players will be able to create a custom, one-of-a-kind avatar to outfit in gear, unlike any seen in Madden NFL before; pull off game changing trick plays, such as behind the back throws and double passes; and execute wild gameplay moments to win in new field locations around the globe.

“The Yard is fast, thrilling and most importantly fun. Players will delve into all new gameplay on mobile and on consoles that will bring to life the backyard football that NFL players and fans grew up loving, where the rules are relaxed, and you can win with attitude.”

Starting today in the all-new Madden NFL 21 Mobile app, players can kick off their experience and create their avatar in The Yard: Underground to begin earning rewards by playing a single-player, narrative journey with 5-on-5 football gameplay. However, when Madden NFL 21 launches on August 28 for Xbox One, PlayStation 4 and PC, gameplay in The Yard will center on6-on-6 backyard-inspired football with the option for players to play solo, online co-op vs. the CPU or online head-to-head multiplayer in teams of one, two, or three players. While the gameplay on mobile and console is different, the goal in The Yard and The Yard: Underground remains the same, get the “W” with style. Plus, players can connect* their accounts and seamlessly access their one-of-a-kind avatar, gear, in-game currency, and Madden Rank via a shared inventory system in The Yard: Underground on mobile and The Yard all year long.

“We wanted to create a new way for players to express themselves and take on small-sided football in an arcade-style experience that’s completely new to Madden,” said Seann Graddy, Executive Producer of Madden NFL 21. “The Yard is fast, thrilling and most importantly fun. Players will delve into all new gameplay on mobile and on consoles that will bring to life the backyard football that NFL players and fans grew up loving, where the rules are relaxed, and you can win with attitude.”

House rules are the name of the game and creativity after the snap is where The Yard’s all-new gameplay takes full effect. New animations lead to momentum-shifting moments, where players can run up the score with extended play combinations. In the Gillette Style Zone, players will be able to customize their avatar, including facial hair, hairstyle and more, to express their individuality. Visiting the Gear Store allows players to outfit their avatar in fresh looks, with exclusive new gear drops planned all season long. Players will also develop their own playstyle as they rack up wins in The Yard, all while earning experience points, rewards and competing in new field locations with unique vibes and varied rule sets.

Download the Madden NFL 21 Mobile today in the App Store or via Google Play to jump into The Yard: Underground to get started and take on solo challenges. For players eager to see more of The Yard on Xbox One, PlayStation 4 and PC, tune in August 13 to the Madden NFL 21 social channels for a deeper look.

Madden NFL 21 Mobile is an all new way to experience Madden NFL on-the-go, while still featuring everything players have come to love about Madden NFL Mobile. Players can become an NFL GM and play through dynamic NFL seasons, take on the best players within the Master Series, build their Ultimate Team and compete with friends in Arena H2H or Overdrive in the deepest and most competitive Madden NFL mobile experience to date.

Madden NFL 21 is developed in Orlando, Florida by EA Tiburon and will be available worldwide August 28, 2020 for Sony PlayStation®4, Microsoft Xbox® One and PC via Origin™ and Steam. Plus, Madden NFL will land on Stadia – Google’s cloud-based gaming platform this winter.

In addition, through partnerships with Sony and Microsoft, EA SPORTS will offer Dual Entitlement, creating ways for players who purchase either an Xbox Series X or PlayStation 5 to upgrade** their copy of Madden NFL 21 from prior generation Xbox One or PlayStation 4 platforms at no additional cost. Discless consoles require a digital entitlement to upgrade. Visit ea.com/nextlevel for more information.

**FOR PHYSICAL PURCHASES OF PRODUCT, UPGRADE CURRENTLY ONLY AVAILABLE TO NEXT GENERATION CONSOLES WITH OPTICAL DISC DRIVE.