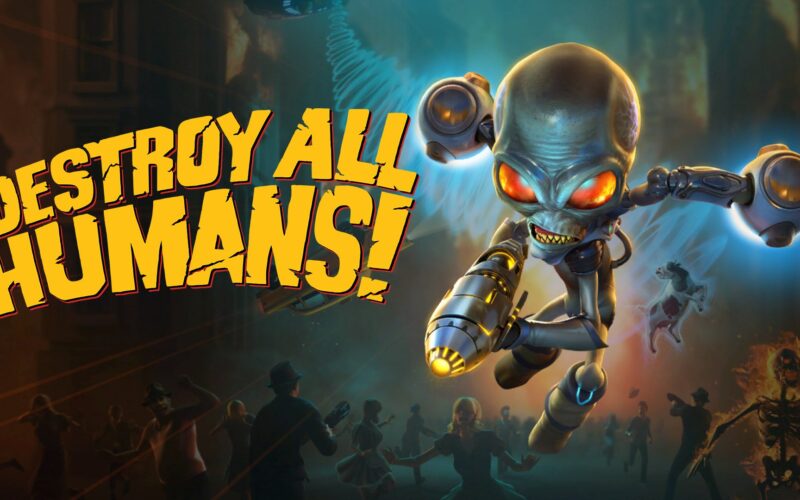 The year is 2005, the PlayStation 2 is one of the best selling consoles ever made and a new release is on its way. Destroy all Humans! makes its B-Movie debut on the console and everyone went mad for the game. So much so that fans have been crying out for a remake ever since. 15 years later and thanks to Black Forest Games and THQ Nordic we finally have the second invasion of earth by those big headed alien creatures.

Set in the 1950’s as all great B-Movie Alien Invasion films were, an idyllic American country town is the setting for the domination of the world by a group of angry little grey aliens. Destroy all Humans! is a simple upgraded remaster of the original title for current gen consoles. To be completely honest, the original game wasn’t exactly a masterpiece, but there was just something that was great fun in playing it. Thankfully the remaster has done a great job of updating for us.

Voice Overs for the game are still from 2005, but the tongue in cheek lines still hold up in this type of game. My main issue was that the audio quality wasn’t great. It was as if it was directly lifted from the original game and not updated through filters. More like it was compressed audio instead.

The graphics for the update certainly aren’t anything amazing, but a lot of time and effort has gone into the new cutscenes that have been added to the game as well as the details on our hero (if thats the word for it), Crypto’s face. It also feels that the humans within the game are a lot more caricature from the original release, but that adds to the humour within the game.

They’ve travelled across time and space

If you played the original back in 2005 you will probably love this game. It did bring back some fond memories for me personally. It stays pretty true to the original source material and fans will appreciate that. I have issues with remakes and remasters as fans to the site will probably know, and a lot of developers can easily ruin what was once a great game (take Resident Evil r3make for instance), but the guys at Black Forest Games have made some subtle improvements. The control mechanics for instance have been completely overhauled to make them feel a lot better than the original game ever did. Its certainly fun piloting the flying saucer destroying human military in tanks and also being able to extract human DNA from a distance.

The new tweaks that have been made to the game do seem like the developers have tried to make the game fun for current gen consoles they can feel like a relic of the past at times. Difficulty spikes in the game are awful as well as stealth tactics that fail a lot of the time. There are a lot of original features that could have been removed from the game to make it better than it is. With the issues in stealth and difficulty insta-fail segments are here in abundance and you end up getting very frustrated with the game in hand.

Level design feels rather limited compared to literally every other game that we get now. Each level being a self contained area which are certainly modest in size. I would have liked the world to have been opened up a little more than we get. The depth within the game now comes from a whole host of extra side objectives within levels. This does add some fun replayability, but it sadly wasn’t enough to keep me going for very long. Even trying to grind out some levels to upgrade my ship, the game took me about 11 hours to complete mainly due to the frustration of the above issues with difficulty and insta-fails due to stealth being awful.

Original fans will love the game, new players will probably get easily frustrated with it. In a universe of remakes Destroy all Humans! is a fun game. Who doesn’t like the idea of taking control of ET and wiping out the backward Southern American families who feature heavily within the game. After all, it has always been those that have claimed to be abducted by ‘Ayleeans’ and having a probe stuck up there butt and this game certainly pokes fun at them.