If you’ve been following our reviews, you’ll realise we’ve covered a few D3 Publisher games. The reviews so far include Disease Hidden Object, Bullet Girl Phantasia, My Butler and Office Lovers. The publisher loves sharing its games with us, and we enjoy playing them. They’re definitely different from the ‘normal’ games out there.

So, what is the game about, and which features does it have? Are there nude scenes, and do you get to have sex? You’ll have to read our Secrets of Me Switch Review.

You are a lady protagonist in the story. However, having played most of the game, we’re going to say that she’s perhaps not a hero in the true sense of the word. There was a twist we didn’t see coming, but we’ll explain a bit more of that in this Secrets of Me Switch Review.

You choose the name for your character, so it’s best not to put a male name, except for giggles. You wake up from plastic surgery, your eyes closed, while a doctor jokes about putting a thermometer up your… in Uranus. Once you’re out of your sleepy state, the game begins properly.

So, the main story for our Secrets of Me Switch Review revolves around this girl who is obsessed with Ichiro Yamada. After all, that’s why she gets the surgery in the first place. She basically replaced most of her body parts to look sexier.

She also happens to be a budding private eye. Using her detective skills, she realises that Yamada is a scam artist, having tricked many women into marrying him, and then taking their money. Infuriated, she goes on a mission of her own.

Her new goal: steal men away from their girlfriends. The first chapter begins when you select a male character to pursue. There are five males in total, and each has their own storylines to them.

Seduce, get naked, have sex…

While we’re not going to promote any form of behaviour in our Secrets of Me Switch Review, it should be clear that you should keep your daughters away from this game. However, since many of us have encountered people like this in real life, it was interesting to see what it would be like as a woman pursuing taken men.

We suggest you take the developer’s advice. Only play this game if:

There are times where you’ll need to make choices. Make sure you save before you decide. Each decision has a consequence, and you may not enjoy the outcome. Load the saved file and choose again.

We’ve become used to this kind of gameplay now with graphic novels, so there were no surprises for our Secrets of Me Switch Review. We did find it odd that there were long reading stints between critical decisions than other titles like My Butler and Office Lovers. There’s more of a focus on the story and sex scenes here.

Of course, this isn’t Grand Theft Auto. While Japes is spending his time enjoying memories of the The Absolute 6 Best Grand Theft Auto Games of All time, we were hoping to get in on some of the action. While the coffee may not be as hot, we saw more fade to blacks than sexual escapades.

Dogenzaka Lab brings out the great Japanese designs once again for this Secrets of Me Switch Review. We’ve fallen in love with their art designs. Perhaps it’s cause we don’t know any better, but these guys know how to draw. The colour, the shading, the settings… they’re all amazing.

There were some scenes that looked close to realistic, we believe for our Secrets of Me Switch Review. We recall an outside scenario on the streets where it actually looked like a location in Japan. In any event, these artists are in a class of their own.

However, that’s as far as the sound element for our Secrets of Me Switch Review goes. We wish there was voice acting, besides the occasional orgasmic moan, but alas. Them voices, we knew them well. Or not.

We don’t blame the developer, though. With so much text, who would want to act them out? Also, with the ability to skip dialogue, what would be the point. It wouldn’t be a good return on investment, paying voice actors for skipped text.

Being a horror writer and a fan of horror games, playing a game like this for our Secrets of Me Switch Review is definitely… intriguing. I loved Diseased Hidden Object the most from D3 Publisher’s titles, but their graphic novels are starting to grow on me.

Is Secrets of Me for the Switch worth buying at £13.49? Only if you’re into manga, looking for handsome guys, stalking, romance, or plastic surgery. ? 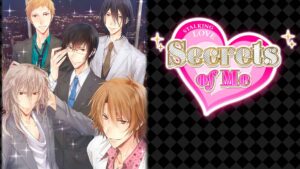