When we started the game, we didn’t know what to expect. We’d only heard of the aerial combat game when we were asked to review it. Surprisingly, we ended up enjoying it tremendously and closed the game just long enough to write this article.

What features will you find in the game, and what are the controls like? Which modes will you enjoy the most, and what options do you have for multiplayer? Find out in our detailed Rogue Aces Deluxe PC Review below.

Let’s start this Rogue Aces Deluxe PC Review with the story and modes. First of all, the main plot revolves around taking care of The Baron’s army. You’ll shoot planes out of the sky or drop bombs on buildings or ground units.

Thankfully, there’s a handy tutorial at the start. You can skip it, but we recommend that you don’t. It teaches you the basics of flight, combat and, most importantly, landing your plane on the airship or base.

You have one life and three planes to complete stage objectives, much like the retro arcade games. Your plane has limited fuel and ammo, which is why you need to land and take care of maintenance and refuelling. The level ends when you complete all missions or die.

The multiplayer section provides more fun and joy, we feel for our Rogue Aces Deluxe PC Review. You can take on local players or bots in different modes. There are three available, mainly Pure Deathmatch, Deluxe Deathmatch and Wing Commander.

In Pure Deathmatch, it’s you against three opponents. There’s a timer, counting down as you continue to blow each other out of the sky. When the countdown ends, the player with the most points wins.

Deluxe Deathmatch is the same, but with more powerful weapons such as the laser and chain gun. Wing Commander has the same experience, but two wingmen fly with each pilot for utter chaos on the screen.

Oh boy, did we love the mayhem and carnage for this Rogue Aces Deluxe PC Review.

For the gameplay element of our Rogue Aces Deluxe PC Review, the controls we pretty easy. We preferred the Xbox controller over the keyboard, which is thankfully compatible with this aerial combat game. You control the speed, direction of flight, and which weapon you want to fire.

There are some gameplay features worth noting for our Rogue Aces Deluxe PC Review. Firstly, taking off and landing aspect. Now, taking off is the easy part, but we struggled slightly with the landing. The game does help you though with an auto-land function that saved us several times.

Another ability is ejecting from the plane. You can do this during solo and multiplayer modes. Why would you want to eject, you ask? Well, your plane may be plummeting to its death.

That’s where the fun kicks in, while parachuting down. You can throw grenades or you can jump into an enemy plane and take it for yourself. For our Rogue Aces Deluxe PC Review, this feature was the best and made for good comedy during multiplayer chaos.

Learning how to manoeuvre is essential if you want to survive. There’s a handy brake function that let’s you turn so fast the enemy won’t see it coming. Don’t make the same mistake we made though, since holding it in will cause you to stall and fall.

The graphics resemble a cartoon, animation design that fits the aerial combat game perfectly. There are coins symbols of different colours that indicate in which direction the various missions are. At the top, there’s a useful fuel meter to warn you when you’re about to run out and should land.

Unless you can eject and grab a new plane.

When playing in multiplayer for this Rogue Aces Deluxe PC Review, the screen became very busy with combat. Fortunately, the game is so small in size that your PC’s performance won’t suffer at all.

Overall, we loved the design and visual effects. When your plane explodes, there’s a funny moment where your character flies out of it while shouting ‘Whoo hoooooo!’ Terribly hilarious and utter fun.

Of course, we found some comedy in the sound component for our Rogue Aces Deluxe PC Review. The commander who issues you orders and tells you what’s happening has a few choice moments of his own.

Asking you if you brought your brown clothes before a battle or telling you that everything is ticket-boo are a few examples of where we cracked a smile.

There’s some action music to go with the chaos and you’ll hear some cool shooting and explosion effects. However, it’s the commander’s dry sense of humour that we loved the most.

Let’s get to our final summary for this Rogue Aces Deluxe PC Review. It’s hard not to love an aerial combat game like this. We suspect it would be more fun on the Nintendo Switch, but the PC version pulls it off very nicely.

The fact that we can play up to four players locally is a massive win! There are fun modes for you to try out, and the comedy within the graphics and humour is what won us over. With easy gameplay on controller or keyboard, the developers have done an amazing job with this title.

Is Rogue Aces Deluxe PC worth buying at $8.99? Hell yeah, son! Now get in that plane and go shoot some bogeys! 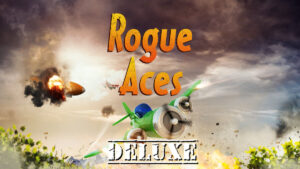