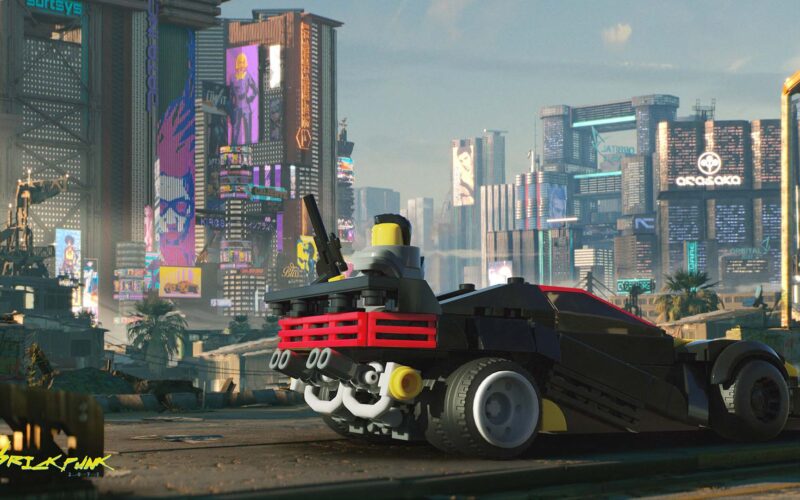 Here are some more details of this project.

Brickpunk 2077 represents unique blend between upcoming Cyberpunk 2077 virtual universe and a model you can place on your real desktop. It is a new series of projects under a common name and theme. This is the first of them: Quadra Turbo-R V-Tech.

Jerry belongs to the so-called AFOLs (Adult Fans Of LEGO®) and he has the YT channel Jerry Builds Bricks. He already has more than 120 instructions. The topic that interests him the most are vehicles of all kinds – mainly supersports, musclecars and cars from movies, TV series and games.

Jerry has been watching Cyberpunk 2077 with enthusiasm since the first trailer, where Jackie’s car appeared for the first time: a fictional cyberpunk mashup called Quadra Turbo-R V-Tech.

The design for BrickPunk 2077 Quadra Car took him two days. The model has 248 parts (their approximate price according to Bricklink.com is about $62), physical dimensions are 16.6 x 8.2 x 5.8 cm, and can accommodate two standard LEGO® figurines.

Because Jerry’s a 3D graphic artist in real life, he couldn’t help himself putting the finished model into the original promo photo for the announcement of Cyberpunk 2077, which inspired him for the whole project).

He’s planning to make a lot more vehicles out of the game, so it’s worth watching / following him on his blog or social media!

We know it’s pretty odd having us talk about LEGO kits, but when Jerry Builds Bricks shared this news with us, we got excited. We’re all waiting patiently for CyberPunk 2077, and Jerry’s putting his impatience to good use.

What do you think of this build? Is it something you’ll be building? Let us know.