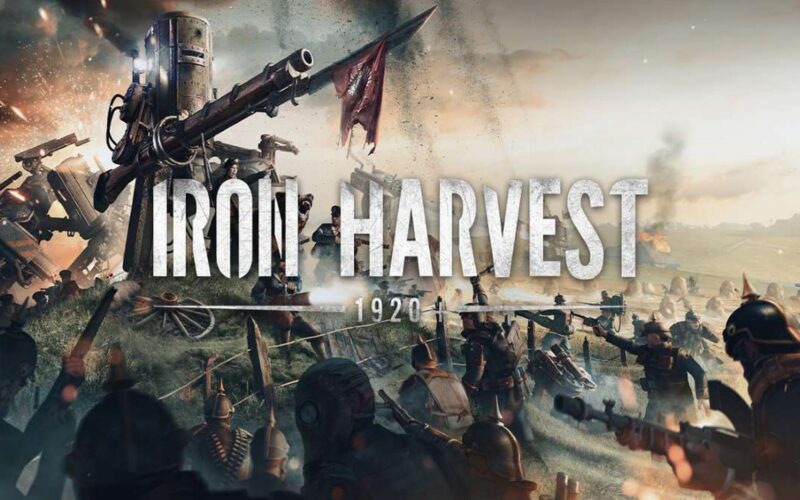 Welcome to our Iron Harvest Review!

Iron Harvest launched on 1 September 2020 as a real-time strategy game. KING Art developed it with Deep Silver as the publisher. It has an intense 30-hour campaign, with combat more centred around the troops than base building. And, it has some wicked machinery.

I can’t remember the last time I had the joy of playing a decent RTS game like Iron Harvest. I couldn’t wait to receive a review code so that I could try it out. And when I started playing it for my Iron Harvest review, I was simply blown away.

What’s the story behind Iron Harvest? Which gameplay elements will you enjoy and is Iron Harvest worth buying on Steam? Find out more in our Iron Harvest review below.

When we started playing the real-time strategy game for our Iron Harvest review, the first thing we noticed was how story-driven it is. The scene is set in the 1920’s era in an alternative reality. It features the Great War, but not as we remember it.

There are three factions in the game, namely Polania, Rusvia and Saxony. As you can tell, the fictional names are based on real nations, which delivers mightily in our Iron Harvest review opinion. In the campaign, you are part of the Polania nation, starting off as a small girl with a bear as a pet.

However, the Rusvia militia are everywhere. The introduction creates a tense atmosphere that skips to a few years later when you complete the tutorial. We found this mixture of story plot and gameplay impressive for our Iron Harvest review.

Tsar Nicholas II still lives in this reality, as well as Rasputin. The great revolution of 1917 is non-existent, which raises many what-if questions answered in the RTS game. So, instead of Polania having an independent state, the Rusvia have taken control.

What is an alternate reality without mechs? You’ll plough through each story with diesel-powered technology, which provides a sort of steampunk element we feel. Even the structures you later build have that classic steampunk touch to it, which we favour.

All in all, the story receives a high rating from us in our Iron Harvest review. With at least 30 hours of campaign content, as well as co-op and multiplayer modes, it’s a real gem for RTS fans out there.

So let’s get to the gameplay part of our Iron Harvest review. The RTS system revolves around squad combat. You’ll receive new units as the game progresses, which work as a team in most cases. In many instances, the goal is to destroy the enemy or conquer the map.

Each faction has different heroes and units capabilities. It’s vital that your heroes stay alive while the squads support them. Later on in the game, you receive structures to build for further defence.

If you’re a hardcore RTS gamer, you’ll love many elements of Iron Harvest. The gameplay is simple, with many of the extra abilities and functions hidden in the unit’s panel. Click on them, and their abilities appear. The easy gameplay mechanics are what set the tone for us in our Iron Harvest review. It meant we could just enjoy the story.

Of course, if you aren’t a veteran RTS player, you may struggle now and again. It’s undeniable that some of the features and maps are challenging, especially later on in the real-time strategy game. You’ll need your wits and logic about you if you’re t survive.

Of course, there’s the multiplayer component to mention in our Iron Harvest review. If you thought the game was hard, then wait until you take on the badasses online. There’s no quarter, and you’ll be crying to your mommy if you don’t have the right strategy against them. It still makes for a glorious experience.

We feel that the graphics are simply astounding for our Iron Harvest review. Every units and mech has such pristine detail. Yes, you’ll need a decent gaming PC to run it in the best mode, but it really delivers in terms of how stunning it looks.

It’s not just about the artwork. It’s also in the movements of each unit, the special effects and the beauty of the vast lands. we were pleasantly surprised by how much the RTS game let us zoom in too.

Finally, we come to the sound component. While there is wonderful music in the background that sets the tone of the battle, you’ll also hear the special effects, explosions and sounds of war. It can become intense at times, which made us lower the volume a tad, but that’s what happens in full-scale war.

We were immensely pleased that there’s voice-over acting. We hate reading long lines of text, and the actors did a splendid job of delivering for each speaking character.

Iron Harvest is any RTS gamers dream come true. We’ve been waiting for an epic strategy game like this, and KING Art has pulled it off well. Some of the gameplay elements are a bit tough to get used to at first, but you’ll master it eventually. While the graphics and sounds are amazing, the element that stood out the most for us in our Iron Harvest review was the story.

Iron Harvest is absolutely worth buying, but there’s nothing wrong with waiting for the price to drop a bit. It’s not going anywhere and we expect loads more content to come from Deep Silver.

What's the story behind Iron Harvest? Which gameplay elements will you enjoy, is Iron Harvest worth buying on Steam? Find out more in our Iron Harvest review!

DescriptionWe've been waiting for an epic strategy game like this, and KING Art has pulled it off well. Some of the gameplay elements are a bit tough to get used to at first, but you'll master it eventually. While the graphics and sounds are amazing, the element that stood out the most for us in our Iron Harvest review was the story.

Shaun M JoosteSeptember 15, 2020DescriptionWe've been waiting for an epic strategy game like this, and KING Art has pulled it off well. Some of the gameplay elements are a bit tough to get used to at first, but you'll master it eventually. While the graphics and sounds are amazing, the element that stood out the most for us in our Iron Harvest review was the story.9.0110
Your RatingUser Rating: 0 ( 0 Votes )
Previous PostFight Crab Nintendo Switch Review - Everything You Need To Know Next Post Cyberpunk 2077 Giveaway! Stand A Chance To Win The Game!