Our Going Under PC Review looks at a fun, arcade, dungeon crawler game released on 24 September 2020. Developed by Aggro Crab with Team 17 as the publishers, you’ll go on an endless adventure as you slaughter monsters for a living. It’s a title that both adults and children can enjoy.

For this Going Under PC Review, I played a total of ten minutes. The main reason is because my daughter, Avril, asked if she could play and promptly took over the controller for the next couple of hours. The very next day, she continued her escapades.

So, our Going Under PC Review is based mostly on me watching her gameplay, which you can also enjoy in the video here below.

What are the elements you will enjoy the most, and what are the gameplay mechanics? Is there a fun storyline, and will you bop to the music? Stay tuned and find out more in our Going Under PC Review.

You live and work in NeoCascadia, a dystopian city with a bad reputation for lurking monsters. The hero is an unpaid intern at a soda factory called Fizzle. Your first day on the job isn’t exactly pleasant, sending you on a mission to clear the basement of some terrible creatures.

While there are tons of fun story elements for our Going Under PC Review, that’s the main drive of the plot. Go down and clear the dungeons. Each time you descend, the random stages change, ending in a boss level for the ultimate fight.

The game records stats for each ‘run’ through a dungeon. You can compare leaderboard times against your own. The more you play the game, you higher your level and abilities and the further down you can go.

Of course, you can run around the lobby before you slide down the mission pipe. There are other employees to talk to and fun activities to perform. Also, you’ll need to attend meetings to discuss business topics, which has some funny dialogue.

Overall for the story aspect of our Going Under PC Review, there’s no overarching story, since the game mainly consists of dungeons runs. However, there are humorous elements to laugh at. You’ll find a twist in your employer’s motives, or you can hire a goblin, date a slime ball or invest in some cryptocurrency.

The gameplay is where all the fun is at in this Going Under PC Review. You can pick up any random item lying around and use it to bash the goblins’ heads in for good measure. The larger or sharper the weapon, the better your chances at a quick kill.

You can also smash open boxes and random items to receive loot. Sometimes you’ll get a power up you can use for a limited time, such as blinding our foe with a camera. There’s the ability to level up or specialise in skills, for which you need a mentor to train you.

The further you progress through the levels, the more enemies you’ll face. Weapons degrade with use, so be careful for when it breaks. You can throw the weapons too, or roll and hold the weapon button for a superior smash.

Avril loved that she could use her pink Xbox controller to play the action game for this Going Under PC Review. It made the movement and actions so much easier than the keyboard. Of course, it meant I couldn’t remove her from the game as she button bashed her way through the levels and beat my score.

Now, for the visual portion of our Going Under PC Review. The graphics have a cartoonish design, with a clean HUD and user interface. The map shows you which rooms you still need to explore, which is outstanding.

You can also view items on the television screens, and there are fun animations throughout the game that’ll have you laughing. It becomes an enjoyable hobby to hit as many objects as you can to see what happens.

There were a few glitches, though. Stand too close to a wall, and the camera sort of goes inside your head. Fortunately, the camera isn’t fixed and you can turn it around for a better few of the dungeon room.

The sound also has hilarious elements, we felt for our Going Under PC Review. At first we thought there was voice acting when the introduction started, but then it quickly switched to jibberish talk like The Sims franchise. Or maybe it’s more akin to Worms?

There’s mellow music when you’re running through the lobby that sounds like electro-pop instrumental tunes. Head down to the action, and you have action music to beat the buttons to. Overall, it’s a rather pleasant experience.

For our Going Under PC Review final verdict, I need to state that anything that makes my daughter happy is immediately fantastic. It didn’t take her long to learn the controls, and she was giggling all the way for the action.

The gameplay and graphics score top marks, followed swiftly by sound and story. In some ways, the graphics and sound remind us of Nidhogg 2.

We definitely feel that Going Under is worth buying at $19.99 for any family that’s looking for a fun game. 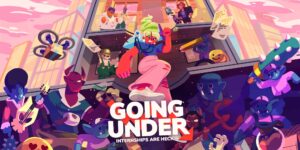 Our Going Under PC review looks at this fun action game in 2020 that will have you playing for days on end. Read more about the features right here!