Our G.I. Joe Operation Blackout Review takes a look at the new exciting title by publishers GameMill Entertainment and Maximum Games, launched 13 October 2020. The developers for this action-adventure shooter are Fair Play Labs and IguanaBee.

Who remembers G.I. Joe: A Real American Hero from 1991 on the SNES? Not that old, hey? Well, I remember playing it for days, months on end. It was one of the more exciting side-scrolling shooting back then. Playing this 2020 game for this G.I. Joe Operation Blackout Review brought back some good memories.

What is the gameplay like and which characters can you choose? Is there co-op modes and what weapons can you use? Read more in our G.I. Joe Operation Blackout Review.

There are two primary modes you can play in G.I. Joe Operation Blackout. The first is campaign, where you can play solo or go splitscreen for local co-op mode. Fortuately, you and you partner can run in different directions to complete different missions and aren’t tied by an invisible thread.

There are a few campaign missions to enjoy, which switches between Team G.I. Joe and Team Cobra. We enjoyed seeing both side during the story for our G.I. Joe Operation Blackout Review, which gives it a proper progressive plot.

What is the story about, you ask?

Well, it’s the legendary tale as old as time. Team Cobra want world domination and Team G.I. Joe want to restore order. There are several missions within each chapter, so you won’t simply be shooting at everyone that crosses your path.

The second mode is Team Battle. This feature gives the game a Quake feeling. You can play locally against a friend or online in a PvP arena. Choose your character and then face -off against each other for the max wins or until the time runs out. Modes include Capture the Flag, Assault, King of The Hill, and Deathmatch Arena.

We can’t decide whether we liked the Campaign or Team Battle more for our G.I. Joe Operation Blackout Review. Both are exciting, and we spent an equal amount of time on both for this article. The Team Battle mode is a great touch for what could have just been a Campaign game.

We’re going to discuss the Campaign gameplay for our G.I. Joe Operation Blackout Review since Team Battle is just about killing each other. Most of the features are the same, except when it comes to special missions.

There are 18 weapons, 36 weapon skins, and 12 alternate character skins for you to collect and use. Most of the weapons consist of guns, except for our swords experts that also have katanas. You’ll run throughout stages in 3D environments, shooting and slashing your way through the enemies.

Having said that, there’s definite linear movement rather than open world exploration. Pathways will be blocked if you have to complete a mission objective first. Once done, whatever was blocking the way blows up or is removed for you to continue.

You switch to first-person when you man a vehicle or huge combat machine. We specifically enjoyed blasting jets out of the sky at one point for our G.I. Joe Operation Blackout Review. Luckily, the massive gun had infinite ammo.

There’s also a neat trick to reloading that reminds us of Gears of War. When you press Reload, a semi-circle appears with a small section in the middle. Hit that right, and you’re reload quicker. Fail, and the gun jams and you’ll wait a bit longer.

You also get a special ability after building up the meter. For Snake Eyes, he explores in a flurry of sword attacks to kill everyone surrounding him. Duke goes on a shooting rampage.

The graphics look and play well, we feel for our G.I. Joe Operation Blackout Review. Instead of realistic imagery, it relies on arcade visuals, which suits the game well. Weapons and attacks look awesome, and the HUD is kept clean with relevant icons out of the way.

The only real issue we had was the blocking elements for the linear progression that confused us at times. For example, there was a moment on the shit where debris stopped us from moving through until we mounted the canons and blew the jets out of the sky.

However, there was a clear path through the debris that looked like we could proceed through. When we attempted it, we were blocked by a wall of air.

We enjoyed the fun music that also reminds us of good SNES times. Of course, the quality is way better than in 1991, but the action beats are familiar. There’s also voice acting, with Duke giving some snide remarks as usual. We also enjoyed the weapons and explosive sounds effects for our G.I. Joe Operation Blackout Review.

Right, let’s give our final thoughts in this G.I. Joe Operation Blackout Review. Overall, it’s an extremely enjoyable game for the whole family. The developer could have just made you run through missions and left it there. Instead, they added a Team Battle Mode and a splitscreen co-op mode.

It has decent graphics and sounds, but we really feel the main points go to the story and gameplay. We do feel that G.I. Joe Operation Blackout is worth buying at £34.99 for fans of the brand, but hold out for a sale drop if you’re a bit strapped for cash or saving for next-gen consoles. 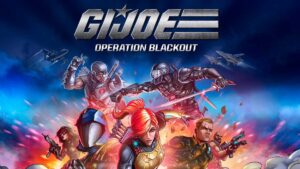 Our G.I. Joe Operation Blackout Review looks at the new exciting title on the Nintendo Switch for 2020. Join us as we take you through all the game features!