Welcome to our Drone Swarm PC Review! astragon Entertainment launches this exciting science fiction RTS game on PC today, 20 October 2020. With regards to the developer, stillalive studios does it again with amazing flare.

It feels like just yesterday that we attended the astragon Entertainment Gamescom 2020 Discord presentation on Drone Swarm. We had some fun laughs with the team, but there were also some pertinent questions. It led to an excitement that’s been building for weeks.

Does the RTS game meet our expectations, and is it everything it promised to be? What is the gameplay like, and how do you operate the swarm? Find out more in our Drone Swarm PC Review below.

The element that we loved the most for our Drone Swarm PC Review is the sci fi tale. The strategy game starts off with an excellent introduction, teaching us what happened to planet Earth.

In 2118, Earth is raided by an alien army of drones. After laying waste to the planet, a select group of heroes sacrificed themselves to the sphere, and their souls formed part of the swarm. With you as the captain of the newly-built ship, the Argo, your mission is to search the universe for a new Earth, while using the swarm to protect your people.

As you progress through the linear storyline, you’ll travel from system to system, scanning planets for viability. during your journey, you will often encounter alien ships. There are different races, and most of them are hostile.

We specifically enjoyed taking on the alien race that destroyed our planet for our Drone Swarm PC Review.

.The dialogue keeps the story rolling and you informed for every mission. There’s a star map which shows you where systems and galaxies are for you to investigate. Furthermore, it provides a preview of any hostiles or upgrades in the area.

Overall, we’re in love with the storyline. Apparently, if you buy the Deluxe Upgrade, you’ll get the comic book for the main story too! You can tell that the developer and publisher put a lot of work into this science fiction game.

We’re excited to talk about the gameplay for our Drone Swarm PC Review for several reasons. Besides the fact that we loved how easy the developer made the RTS game to play in terms of controls and movement, we’re so happy to play a space game that isn’t turn-based.

So at the beginning there are two main orders you can give the swarm. As you progress through the story, you unlock new abilities and moves. For instance, we soon received the cannonball skill where the drone bundles up and pushes objects away or towards you.

You’ll need to learn early on how to use your 32,000 drones effectively, we discovered for our Drone Swarm PC Review. First, select an offense or defense move and then use the mouse to draw a pattern. We eventually realised that we can zigzag several times over an enemy to instruct the swarm to attack it several times before returning to the mothership.

You’ll use the shield command to draw barriers between you and your foe. It allows you to remain protected so that you can keeping at them. However, missiles, lasers and other weapons can destroy and cut through your walls, so you’ll need to rebuild them from time to time.

Your mothership with the sphere attached to it isn’t useless. You unlock new tech abilities by completing stages. For instance, you can attach a rail gun to the top of the mothership which will blast alien ships when they are close enough. We found these attachments rather enjoyable for our Drone Swarm PC Review.

There are two aspects for graphics to discuss in our Drone Swarm PC Review. Firstly, the gameplay graphics. The visuals are nothing but stellar for this amazing RTS game. Besides planets and space in the background, the colours and lighting during battles are stunning.

We’re also impressed with the amount of detail. You can zoom in quite close and see how much effort the designs put into each ship and drone. Of course, you’ll want to stay zoomed out so that you can see the battlefield.

The second graphic element for our Drone Swarm PC Review is the storyline visuals. 451 Media Group came to the helm here, with stunning imagery representative of Michael Bay’s comic book.

You’ll see cutscenes with fantastic detail, and we’re actually excited to see which other games this team designed storyboard visuals for. Their Facebook page does look rather exciting.

As we always say in our reviews, we love games with voice acting. For our Drone Swarm PC Review, we were pleased to find this element present. The actors did a good job of conveying emotions, where it was serenity, anxiety, fear or joy. It was such a pleasure to hear to speak in the dialogues rather than reading endless lines of text.

The music is so great, the team made a soundtrack for it that you can download with the Deluxe Upgrade. The music has an excellent action beat to it, syncing in harmony to the battles on the screen. We also enjoyed the sounds of the alien ships exploding or missiles hitting our drone walls.

Right, and now for our final verdict in this Drone Swarm PC Review.

We couldn’t find any fault with this science fiction RTS game. There are many hours in the storyline for you to enjoy and so many galaxies to visit. With a wealth of upgrades, you become more powerful as you progress through the plot.

Gameplay is made easy through swift movements, as well as attack and defense buttons at the bottom. The visuals are absolutely amazing, with a soundtrack so stunning that they made an album of it.

At the current price on Steam, Drone Swarm is absolutely worth buying, whether your an RTS fanatic or new to the genre. As a matter of fact, we’re willing to say that you’ll love this game even if you’ve never played RTS before. 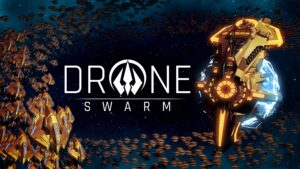 Our Drone Swarm PC Review looks at this exciting RTS game release by Astragon Entertainment. Read all about the gameplay, graphics and story here!